LITTLE WOMEN AUDIO BOOK: CHAPTER 8: ALL PLAY AND NO WORK

'The first of June, and the King family is going on holiday tomorrow!' said Meg. 'I'm free for three months!'
'And Aunt March went away for her holiday today,' said Jo. 'Isn't life wonderful!'
'What will you do all your holiday?' asked Amy.
I'll stay in bed late, and do nothing,' said Meg.
'I have lots of books to read,' said Jo.
'Let's not do any studying, Beth,' said Amy. 'Let's play all the time, and rest, as Jo and Meg are going to do.'
'I will if Mother doesn't mind,' said Beth.
Mrs March agreed to the plan and said they could try it for a week.
'But,' she added, 'I think by Saturday night you will find that all play and no work is as bad as all work and no play.'
Next day, Meg appeared at ten o'clock and ate breakfast alone. It was a lonely meal and the room was untidy, because Beth had not cleaned it.
Jo went to the river with Laurie, then sat in the apple tree and read a book. Beth began to tidy things in her cupboard, but she got tired and left it half-done. She went to her piano, glad that she did not have to wash the cups and plates. Amy sat in the garden to draw, hoping someone would see her and say something nice about her picture. But no one appeared, so she went for a walk, got caught in the rain and came home very wet.
At tea, everyone said that it had been a delightful but unusually long day. Meg, who had been shopping in the afternoon, now decided that she did not like the dress she had bought. Jo had a headache from reading too long. Beth couldn't find anything in her cupboard, and the rain had made Amy's dress so wet that she couldn't wear it to Katy Brown's party the next day.
Mrs March listened, smiled and said nothing. The week seemed to get longer and longer with nothing much to do, and by Friday the girls were glad that it was nearly over. Then Mrs March gave Hannah a holiday, and when the girls got up on Saturday, there was no breakfast ready, no fire in the kitchen, and no mother waiting for them.
'What has happened?' said Jo.
Meg ran upstairs, then came down to say that Mother  was staying in her room to have a rest. 'She says we must look after ourselves today,' Meg said.
'Good, I want something to do,' said Jo.

Secretly, they were all pleased to have something useful to do again. Beth and Amy put cups and plates on the table while Jo and Meg got the breakfast, then Meg took some tea and an egg up to Mrs March. The tea was too strong and the egg was burned. Mrs March did not complain, but she laughed to herself afterwards.
Jo decided to invite Laurie to dinner. 'There's meat and vegetables and plenty of potatoes,' she told Meg, 'and we can have strawberries, and then coffee.' Her mother said she did not mind at all because she was going out for dinner.
Jo did her best, but the potatoes were still hard in the middle, the vegetables were cooked too long and fell to pieces, and the meat was burned black. The strawberries were not ready for eating, and she put salt on them instead of sugar! Unfortunately, this was not discovered until Laurie began eating them. He pretended everything was all right, but Amy took a spoonful and ran from the table.
'What's wrong?' said Jo.
Meg and Laurie told her. 'Oh, no!' said Jo. Then she saw Laurie start to smile, and she began to laugh. Soon everyone was laughing with her.
'What a terrible day!' said Jo, after they had cleared everything away.
Mrs March returned home later. 'Have you enjoyed your week of all play and no work, girls, or do you want another week of it?' she said.
'I don't!'said Jo.
'Nor do I!' shouted the others.
'Mother, did you go out and leave us just to see how we would manage?' asked Meg.
'Yes,' said Mrs March. 'I wanted you to see that being comfortable depends on us all helping each other and not just thinking of ourselves. Isn't it better to have time for play and time for work, and to make each day useful and enjoyable?'
'Oh, it is, Mother, it is!' said the girls. 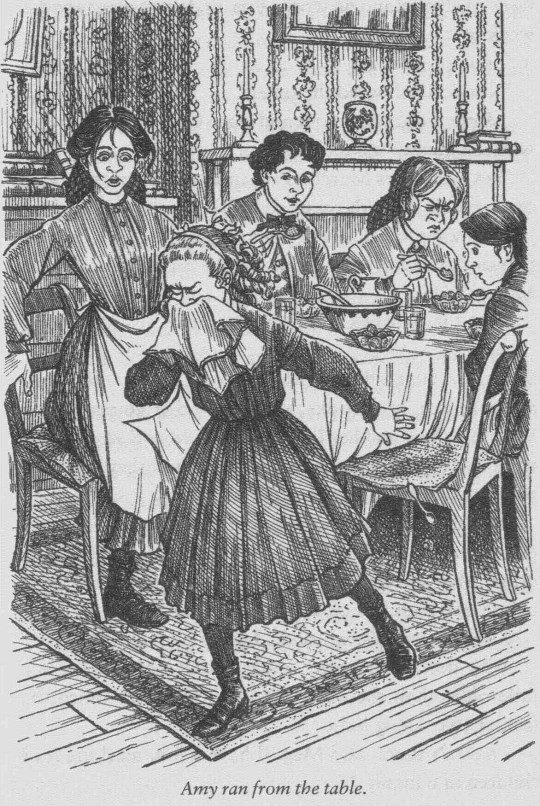 Some days later, all four girls went on a picnic with Laurie and his tutor, Mr Brooke, and some other young people.
Sallie Gardiner and her English friend, Miss Kate Vaughn, were among them. It was a sunny day and they had their picnic on a hill, under some trees.
After the meal, most of the young ladies and gentlemen played games, but Miss Kate sat under a tree and began to draw. Meg watched, while Mr Brooke lay on the grass beside her, with a book which he did not read.
'I wish I could draw,' said Meg.
'Why don't you learn?' replied Miss Kate. She was a little older than the other girls and was very much the fashionable young lady.

'I haven't time,' said Meg. 'I have a job, teaching four children in a family 'Oh!' said Miss Kate, looking rather shocked. She said no more, but her face showed that she thought being a private teacher was little better than being a servant, and Meg's cheeks quickly became red.
'In America, young ladies prefer to work and earn money for themselves,' said Mr Brooke quickly, 'and not expect others to pay for everything.'
'I see,' said Miss Kate, coldly. Soon after, she took her drawing and moved away.
'There's no place like America for us workers, Miss Meg,' said Mr Brooke, smiling. His brown eyes looked at Meg warmly, and she smiled back at him.
'I wish I liked teaching as much as you do,' she said.
'You would if you were teaching Laurie,' said Mr Brooke. I'll be sorry when he goes to college next year. But then I shall become a soldier.'
'I think every young man wants to be a soldier,' said
Meg, 'but it's hard for the family who stay at home.'
'I have no family, and not many friends to care if I live or die,' said Mr Brooke, sadly.
'Laurie and his grandfather would care,' said Meg, 'and
we would all be very sorry if anything happened to you.'
'Thank you,' said Mr Brooke, cheering up immediately.

IELTS READING (from 27 to 40)listen to the reading passage
Visual Symbols and the Blind Part 1 From a number...
AUDIO BOOKS IELTS IELTS-READING