'Look!' said Meg, excitedly, a day or two later. She waved a piece of paper at Jo. 'An invitation to a New Year's party at Sallie Gardiner's house, and it's for both of us. Mother says we can go, but what shall we wear?'

'Our best cotton dresses,' said Jo, 'because we haven't got anything else. Yours is as good as new, but mine has a burn and a hole in the back.'

'Then you must keep your back out of sight,' said Meg. 'I'll have a new ribbon for my hair, and my new slippers. And my gloves are all right.'
'Mine are stained, so I'll have to go without.'
'You must wear gloves to a dance, Jo!' cried Meg.
'Then we'll each wear one good one and carry a bad one,' said Jo.

Meg looked worried. 'All right, but you will behave nicely, won't you? Don't stare, or put your hands behind your back.'
On New Year's Eve, the two younger sisters watched the two older girls get ready for the party. There was a lot of running up and down, and laughing and talking. Meg wanted some curls around her face, so Jo began to work on the papered ends of Meg's hair with a pair of hot tongs.
'Should they smoke like that?' asked Beth. 'It's the wetness drying,' said Jo.
'What a strange burning smell!' said Amy.
I'll take the papers off now,' said Jo, 'and you'll see lots of little curls.'

She took the papers off - and, to her horror, the burnt hair came off with them!
'Oh, oh! What have you done to my hair!' cried Meg.
'I always get things wrong,' said Jo unhappily. 'I'm so sorry. I suppose the tongs were too hot.' 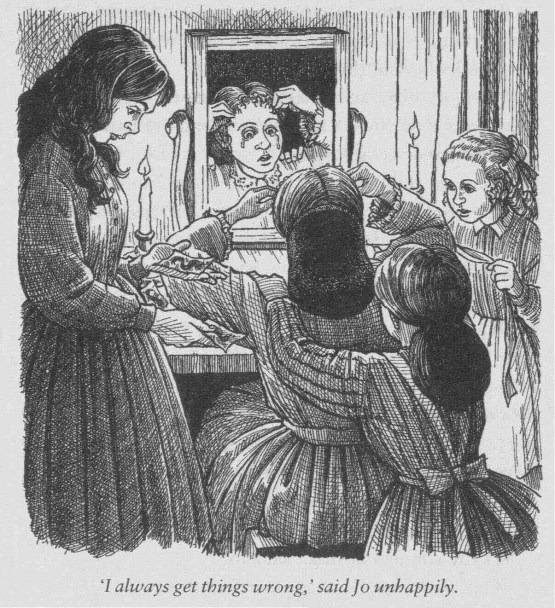 'Don't worry,' Amy told Meg, who was crying. 'Just tie your ribbon so that the ends come on to your forehead a little, and it will look quite fashionable.'
At last, Meg and Jo were ready and went off to the Gardiners' house where Mrs Gardiner welcomed them kindly. Meg immediately began to enjoy herself with Sallie, but Jo wasn't interested in girlish talk and stood with her back carefully against the wall, watching the dancing. Soon Meg was asked to dance, then Jo saw a big red-haired boy coming towards her and she quickly went through a door into a small room.

Unfortunately, another shy person was already hiding there and she found herself looking at the 'Laurence boy'.

'Oh dear, I didn't know anyone was here!' Jo said.
The boy laughed. 'Don't go. I came in here because I don't know any people, but I think I've seen you before,' he said. 'You live near us, don't you?'
'Next door,' said Jo. 'We enjoyed your nice Christmas present.'
'My grandfather sent it, Miss March.'
'But you gave your grandfather the idea, didn't you, Mr Laurence?'
'I'm not Mr Laurence, only Laurie,' he said.
'And I'm not Miss March, only Jo,' she said. 'Do you like parties?'

'Sometimes,' he answered. 'I've been abroad a lot recently, and I don't know how you do things here.'
'Abroad!' said Jo. 'Oh, did you go to Paris?'
'We went there last winter.'
'Can you speak French?' she asked.
He said something in French, and Jo listened carefully.
'You asked, "Who is the young lady in the pretty slippers?"

It's my sister, Meg, and you knew it was! Do you think she's pretty?'

'Yes,' he said. 'She looks so fresh and quiet.'
This pleased Jo very much, and soon the two of them were talking easily, like old friends. 'I hear you're always studying hard,' said Jo. 'Are you going to college soon?'
'Not for a year or two,' he said. 'I'm sixteen next month, and I won't go before I'm seventeen.'
'I wish I was going to college,' said Jo.
'I hate even the idea of it!' said Laurie.
Jo wanted to know why, but he looked so serious that instead of asking she said, 'Why don't you go and dance?'
'I will if you'll come too,' he answered.
'I can't because—' Jo stopped.
'Because what?'

'You won't tell?'
'Never!'
'I've a bad habit of standing near a fire, and Ixburn my dresses,' said Jo. 'I have to keep still so that no one will see the burn on this one. Laugh if you like.'
But Laurie didn't laugh. 'Never mind that,' he said gently. 'Please come.'
Jo smiled. 'All right,' she said. Thank you.'

When the music stopped, they sat down and began to talk, but Jo saw Meg waving at her. She went over and followed her sister into a side room.
'I've turned my foot over and hurt my ankle,' said Meg.
'I can't walk on it, and I don't know how I'm going to get home.'
'I'm not surprised you turned your foot over in those stupid high shoes,' said Jo. 'You'll have to get a carriage or stay here all night.'
'A carriage will cost a lot,' said Meg, 'and I can't stay here for the night because the house is full. I'll just rest until Hannah comes to fetch us, then do the best I can.'
'They're going in for supper now,' said Jo. Til stay with you.'
'No, run and bring me some coffee,' said Meg.
Jo found the coffee, but immediately dropped some down the front of her dress. She was cleaning it off with Meg's glove when a friendly voice spoke to her.
'Can I help?' said Laurie. He had a cup of coffee in one hand and a plate with a cake on it in the other.
I was trying to get something for Meg,' said Jo.

'And I was looking for someone to give this to,' he said. He fetched more coffee and a cake for Jo, then the three of them had a happy time talking together until Hannah arrived. Meg completely forgot about her foot and stood
up quickly. She cried out with pain, and when Laurie saw that she could not walk, he immediately offered to take them home in his grandfather's carriage.
'But you can't want to go home yet,' said Jo.
I always go early,' said Laurie.
He sat with the driver, and the two girls sat with Hannah inside the carriage and talked excitedly about the party.
'I had a wonderful time, did you?' said Jo.
'Yes, until I hurt myself,' said Meg. 'Sallie's friend, Annie Moffat, has asked me to go and stay with her for a week in the spring, when Sallie does.'

IELTS READING (from 30 to 41)-listen to the reading passage
PAPER RECYCLING A Paper is different from other waste produce because...
AUDIO BOOKS IELTS IELTS-READING

SHORT STORY -Can-Can by Arturo Vivante(with sound)
“I’m going to go for a drive,” he said to...
AUDIO BOOKS