'Christmas won't be Christmas without any presents,' said Jo crossly.
'It's so awful to be poor!' agreed Meg, looking at her old dress.
'It's not right for some girls to have pretty things, and others to have nothing at all,' said little Amy.
'We've got Father and Mother, and each other,' said Beth gently.
The four young faces round the fire cheered up as they thought of this, but then Jo said sadly, 'We haven't got Father, and we won't have him for a long time.' She didn't say 'perhaps never', but each silently thought it, remembering that he was away at the war in the South. 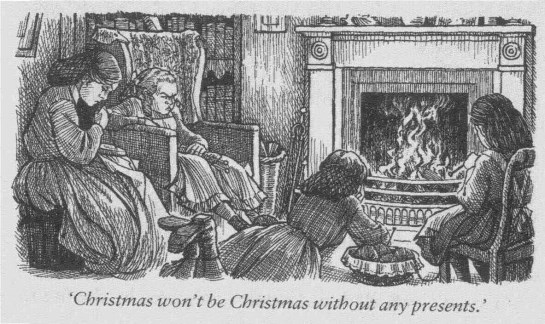 Then Meg said, 'Mother says we shouldn't spend money on presents when our men are fighting a war.'
'We can't expect anything from Mother or each other,' said Jo, 'but we only have a dollar each, and that won't help the army much. Let's each buy ourselves what we want, and have a little fun. We work hard to earn it.'
'I do, teaching those awful children,' said Meg.
'What about me?' said Jo. 'I'm shut up all day working for a terrible old lady, who gives me different orders every five seconds!'
'I think washing cups and plates and keeping things tidy is the worst work in the world,' said Beth. 'My hands get too tired to play my music.'

'I have to go to school with girls who laugh at my dresses and say cruel things because my father isn't rich,' said Amy.
'I wish we had the money Father lost when we were
little, Jo,' said Meg.
'I wish I was a boy,' said Jo. 'Then I could go and fight beside Father!'
Meg was sixteen and very pretty, with large eyes and soft brown hair, and white hands. Fifteen-year-old Jo was very tall and thin. Her long, dark-red hair was usually pushed up out of the way. Beth was thirteen, a very shy girl who seemed to live in a happy world of her own. Amy was the youngest, but thought herself to be the most important. She had blue eyes, and yellow hair which curled
on to her shoulders.
At six o'clock, Beth put a pair of slippers by the fire to warm and Meg lit the lamp. Amy got out of the comfortable chair without being asked, and Jo forgot how tired she was and held the slippers closer to the fire.

I'll get her some with my dollar,' said Beth.

'No, I shall!' cried Amy.
I'm the oldest—' began Meg.
I'm the man of the family now Father is away, and I shall buy them,' said Jo.
'Let's each get her something and not get anything for ourselves,' said Beth.
'That's a kind idea!' said Jo. 'What shall we get?'
Everyone thought for a moment, then Meg said, I'll give her a nice pair of gloves.'
'The best army slippers,' said Jo.
'Some handkerchiefs,' said Beth. 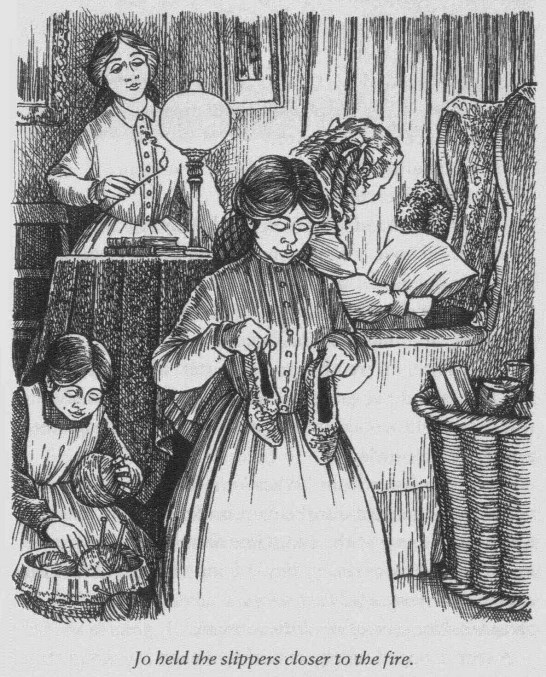 'A little bottle of perfume,' said Amy. 'It won't cost much, so I'll have some money left to buy something for me.'
'We'll let Mother think we're getting things for ourselves, and then surprise her,' said Jo.
Mrs March arrived home soon after. She took off her wet things and put on her warm slippers. Meg made the tea, Jo brought wood for the fire, Beth was quiet and busy, and Amy gave orders.

I've got a letter from Father!' cried Mrs March.

It was a letter to cheer them up, and the special messagefor the girls came at the end: Give them all my love and a kiss. I think of them every day. I know they will be loving children to you, and that when I come back, I will be prouder than ever of my little women.
A tear dropped off the end of Jo's nose. 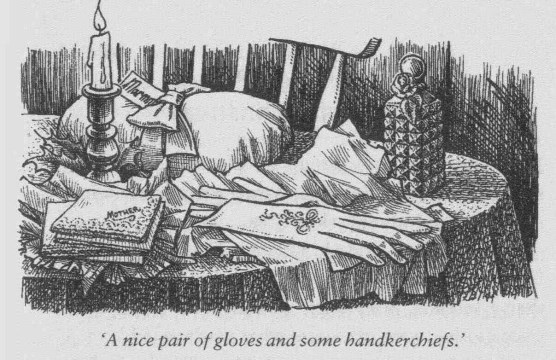 Amy hid her face on her mother's shoulder. 'I'm selfish,' she cried, 'but I'll try to be better.'
'We all will!' cried Meg. 'I think too much about the way I look, and hate to work, but I won't any more.'
'And I'll try to be a "little woman",' said Jo, 'and not be rough and wild.'
Beth said nothing, but she began to work hard at a blue army glove she was making.
So the four girls decided that they would all try very hard to be good. They would never be cross, or lazy, or selfish - and they would all help each other. They talked over their plan that evening, while they made sheets for Aunt March. Then at nine o'clock they stopped to sing a song. Beth played the old piano, and Meg and her mother led the singing. Jo always sang in the wrong place, but the girls never got too old to sing together.

IELTS READING (from 1 to 13)listen to the reading passage
A Remarkable Beetle Some of the most remarkable beetles are...
AUDIO BOOKS IELTS IELTS-READING