One October afternoon, Jo caught a bus into the town and stopped outside a building in one of the busy streets. She went in, looked up the stairs and, after a minute, ran out again. She did this several times, to the great amusement of a young man who was watching from the opposite side of the road. But the fourth time, Jo gave herself a shake and walked up the stairs.
The young man crossed the road and waited. It was Laurie. Ten minutes later, Jo came running out, but did not look pleased to see him.
'What are you doing here?' she said.
I'm waiting to walk home with you,' he said. 'I've a secret to tell you, but first you must tell me yours.'
'You won't say anything at home, will you?' said Jo.
'Not a word,' promised Laurie.
'I've left two of my stories with a newspaper man,' said
Jo, 'but I'll have to wait until next week before I know if they will be printed.'
'Miss March, the famous American writer!' said Laurie, throwing his hat into the air and catching it.
Jo looked pleased. 'Now, what's your secret?'
'You remember Meg lost a glove at the picnic?' said Laurie. 'Well, I know where it is.'
'Is that all?' said Jo, looking disappointed.

'Wait until I tell you where it is,' he said.
'Tell me then,' said Jo.
Laurie whispered three words in Jo's ear.
She stared at him, looking both surprised and displeased.
'How do you know?'
'I saw it.'
'Where?' asked Jo.
'Pocket. What's wrong, don't you like it?'
'Of course not. It's stupid! What would Meg say if she knew?'
'You mustn't tell anyone,' said Laurie.
'I didn't promise,' Jo reminded him.
'I thought you would be pleased,' he said.
'Pleased at the idea of someone coming to take Meg away?' said Jo. 'No, thank you.'

She ran off down the hill, but Laurie came after her and reached the bottom first. She came up behind him, her face red and her hair blowing in the wind.
'That was fun!' she said, forgetting her crossness in the enjoyment of a good run.
At that moment, someone passed by, then stopped and looked back. It was Meg.
'What are you doing here?' she said when she saw Jo.
'You've been running, haven't you? Jo, when will you start to behave like a young lady?'
'Don't make me grow up yet, Meg,' said Jo, looking sad. 'It's hard enough having you change so suddenly.'
Meg was growing into a woman, and Laurie's secret made Jo realize that Meg would leave home one day, perhaps soon.
Two Saturdays after Jo had gone secretly into town, Meg saw Laurie chasing Jo all over the garden before the two of them fell on the grass, laughing and waving a newspaper. 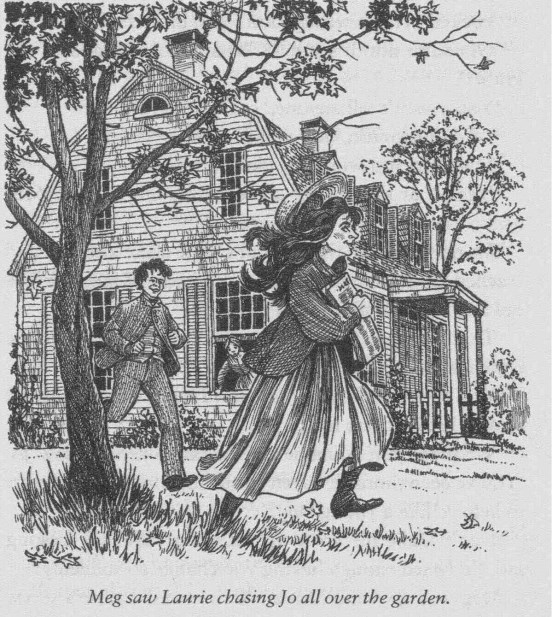 What can we do with that girl?' said Meg. 'She never will behave like a young lady.'
Minutes later, Jo came in with the newspaper. She sat down and began to read it.
'Are you reading anything interesting?' asked Meg.
'Only a story,' said Jo.
'Read it aloud,' said Amy. 'It may amuse us.'
Jo began to read very fast, and the girls listened. It was a love story about two people called Viola and Angelo, and most of the characters died in the end. But the girls enjoyed it, and Meg even cried a little at the sad parts.
'Who wrote it?' asked Beth, watching Jo's face.
Jo put down the newspaper. 'I did,' she said, her eyes bright and shining.
'You?' said Meg, surprised.
'It's very good,' said Amy.
'I knew it!' said Beth. She ran across and put her arms around her sister. 'Oh, Jo, I am so proud!'
And how proud Mrs March was when she was told.
Everyone began to speak at the same time. 'Tell us all about it.' 'How much did you get for it?' 'What will Father say?' 'Won't Laurie laugh!'
So Jo told them all about it, and that evening there was no happier or prouder family than the Marches.

IELTS READING (from 27 to 40)-listen to the reading passage
A.D.D. - Missing Out on Learning Study requires a student's...
AUDIO BOOKS IELTS IELTS-READING
MAKE A COMMENT