Christmas Day was very different that year. Beth felt much better and was carried to the window to see the snowman which Jo and Laurie had made. It had a basket of fruit and flowers in one hand and a new piece of music in the other. Laurie ran up and down, bringing in the presents, and Jo sang a funny song.
'I'm so happy!' laughed Beth, as Jo carried her back to the other room to rest after the fun. 'Oh, I do wish that Father was here too!'
Half an hour later, Laurie came to the house and opened the door quietly. 'Here's another Christmas present for the March family!' he called out.
He moved away, and in his place appeared a tall man holding the arm of another tall man, who tried to say something but couldn't.
'Father!' cried Meg and Jo together - and Mr March disappeared under lots of loving arms and kisses. Mr Brooke kissed Meg - by mistake, as he tried to explain.
Suddenly, the door to the other room opened, and there was Beth, running straight into her father's arms. There were tears of happiness on many faces before all the excitement died down. Then Mrs March thanked Mr Brooke for taking care of her husband, and he and Laurie left the family to themselves. 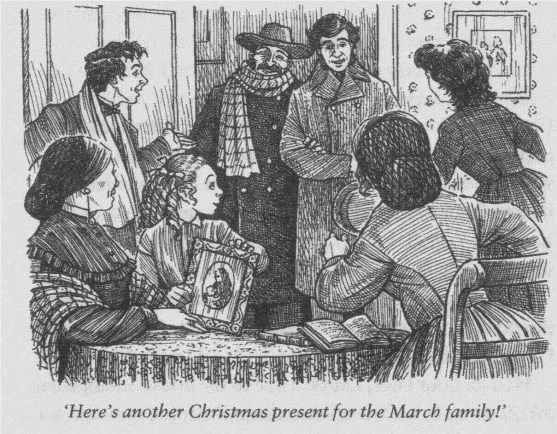 Mr March and Beth sat in one big armchair, and the others sat around them. 'I wanted to surprise you all, and the doctor let Mr Brooke bring me home,' said Mr March. 'John has been so good to me. He is an excellent young man.' Mr March looked at Meg, who was staring at the fire, then he smiled at his wife. She smiled back. Jo understood exactly what the smiles were saying, and went
out to the kitchen complaining to herself about 'excellent young men with brown eyes!'
There never was a Christmas dinner like the one they had that day. Mr Laurence and his grandson ate with them, and so did Mr Brooke. Jo gave the tutor many black looks and would not speak to him, which amused Laurie.
The guests left early and the happy family sat together around the fire.

'A year ago we were complaining about the awful
Christmas we expected to have, do you remember?' said Jo.
'It's been quite a good year,' said Meg, thinking about Mr Brooke.
'I think it's been a hard one,' said Amy.
'I'm glad it's over, because we've got Father back,' whispered Beth, who was sitting on his knee.
'I've discovered several things about you young ladies today,' said Mr March.
'Oh, tell us what they are!' cried Meg.
'Here's one,' he said, taking her hand. It had a small burn on the back and two or three little hard places on the front.

'I remember when this hand was white and smooth. It was pretty then, but to me it's much prettier now. I'm proud of this hard-working hand, Meg.'
'What about Jo?' whispered Beth. 'She's tried so hard, and has been very, very good to me.'
He smiled and looked at Jo sitting opposite. 'Her hair may be short, but I see a young lady now. Her face is thin and white from worrying, but it has grown gentler. Perhaps I'll miss my wild girl, but I'm sure I'll love the warm-hearted woman who has taken her place.' Jo's face was red in the firelight as she listened.
'Now Beth,' said Amy.
'She's not as shy as she used to be,' said her father lovingly, and he held Beth close when he remembered how near they had come to losing her. Then he looked down at Amy by his feet. 'I've noticed today that Amy has helped everyone patiently and with a smile. She's learned to think more about other people, and less about herself.' Beth moved out of her father's arms and went to the
piano. She touched the keys softly and began to sing. Soon, the others joined her in a happy Christmas song.
The next afternoon, Jo and Meg were sitting at the window when Laurie went by. When he saw Meg, he fell on one knee in the snow, beat his chest, and put out his arms towards her. When Meg told him to go away, he pretended to cry before walking away looking miserable.
Meg laughed. 'What was he doing?' she said.

'He was showing you how your John will act,' answered Jo, crossly.
'Don't say my John, it isn't right.' But Meg said the words again silently inside her head.
'If he asks you to marry him, you'll cry or look stupid, instead of saying a loud No,' said Jo.
'No, I won't,' said Meg. I'll say, "Thank you, Mr Brooke, you are very kind, but I am too young to marry you. Please let us be friends, as we were."'
'I don't believe it,' said Jo.
'It's true. Then I'll walk out of the room with my head high.' Meg got up and pretended to do it - but ran back to her seat when she heard someone knock on the door.
Jo opened it with an angry look.
'Good afternoon,' said Mr Brooke. 'I came to get my umbrella, which I left behind yesterday.'
ı'll  get it,' said Jo, pushing past him. 'Now Meg can tell him,' she thought.
But Meg was moving to the door. 'I expect Mother will want to see you,' she said. I'll call her.'
'Don't go,' he said. 'Are you afraid of me, Meg?'
'How can I be afraid when you've been so kind to Father,' said Meg. 'I wish I could thank you for it.'
'You can,' he said. And he took Meg's small hand in his and looked at her lovingly.
'Oh, please don't,' she said, looking frightened.
'I only want to know if you love me a little, Meg,' he said gently. 'I love you so much.

This was the moment to repeat the words she had told Jo, but Meg forgot them all. 'I don't know,' she said, so softly that John had to move closer to hear her reply. He smiled gratefully. 'Will you try to find out?'
'I'm too young,' she said, hesitating but feeling her heart beating rather fast.
I'll wait while you learn to like me,' he said. 'Will it be very difficult?'
'Not if I choose to learn,' she said.
'Please choose, Meg. I love to teach, and this is easier than German,' said John, taking her other hand.
She looked at him and saw that he was smiling. He seemed so sure of success that Meg became a little annoyed.
She felt excited and strange, and taking her hands away from his, she said, 'I don't choose. Please go away!'
Poor Mr Brooke looked shocked. 'Do you mean that?'

'Yes,' she said, rather enjoying the game she was playing.
'I don't want to think about these things. It's too soon.'
I'll wait until you've had more time,' he said, and looked so unhappy that Meg began to feel sorry for him.
It was at this moment that Aunt March came in. She had come to see Mr March and was hoping to surprise the family. She did surprise two of them. Meg, with her face bright red, just stared at her aunt, while Mr Brooke hurried into another room.
'Goodness me, what's all this?' cried Aunt March.
'It's Father's friend,' said Meg hurriedly. 'I'm so surprised to see you, Aunt March.

'I can see that,' said Aunt March, sitting down. 'What has he said to make your face turn pink?'
'Mr Brooke and I were just. . . talking,' said Meg.
'Brooke? The boy's tutor? I understand now. I know all about it because I made Jo tell me. You haven't promised to marry him, have you, Meg? If you have, you won't get one bit of my money, do you hear?'
It was exactly the wrong thing to say. When Meg was ordered not to marry John Brooke, she immediately decided that she would. Til marry whoever I want to, Aunt March, and you can give your money to anyone you like!' she said.

'You'll be sorry!' said Aunt March. 'Why don't you marry a rich man to help your family?'
'Father and Mother like John, although he's poor,' said Meg.
'Be sensible, Meg,' said her aunt. 'He knows I have money, and that's why he likes you, I suspect.'
'Don't say that!' said Meg. 'My John wouldn't marry for money any more than I would! We'll work and wait, and I'll be happy with him because he loves me, and—' Meg stopped as she remembered that she had told 'her John' to go away.
Aunt March was very angry. 'Just don't expect anything from me when you are married!' she said. And she went out of the room, banging the door behind her.
Meg didn't know whether to laugh or cry. Before she could decide, Mr Brooke came back in from the next room and put his arms around her. 'Oh Meg, I could hear your voices,' he said. 'Thank you for proving that you do love me a little.'
'I didn't know how much until she said those things about you,' said Meg.
'So I can stay, and be happy?' he said.

'Yes, John,' she whispered, and hid her face on John's chest.
Jo returned and found them like that. Meg jumped and turned round, but John Brooke laughed and kissed the shocked Jo, saying, 'Sister Jo. Wish us luck!'
Jo ran upstairs to find her parents. 'Go down quickly!' she said. 'John Brooke is behaving terribly and Meg likes it!'
Mr and Mrs March left the room in a hurry, while Jo threw herself on the bed and told the awful news to Beth and Amy. But the little girls thought it was all most interesting and delightful.
Nobody knew what was said that afternoon, but a lot of talking was done. The quiet Mr Brooke managed to persuade his friends that his plans were good and sensible, then he proudly took Meg in to supper. Everyone looked so happy that Jo tried to look pleased too.
After supper, Laurie arrived with some flowers for 'Mrs John Brooke', then he followed Jo into the corner of the room while the others went to welcome old Mr Laurence.
'What's the matter, Jo?' said Laurie. 'You don't look very happy.'
'Nothing will ever be the same again,' said Jo sadly.
'I've lost my dearest friend.'
'You've got me,' said Laurie. 'I'm not good for much, but I promise I'll always be your friend, Jo.'
'I know you will,' answered Jo, gratefully.
'Then don't be sad,' he said. Til be back from college in three years' time, and then we'll go abroad, or on a nice trip somewhere. Wouldn't that cheer you up?'
'Anything can happen in three years,' said Jo.
'That's true,' said Laurie. 'Don't you wish you knew what was going to happen?'
'I don't think so,' said Jo. 'It may be something sad, and everyone looks so happy now.' As she spoke, she looked round the room, and her face brightened at the sight.
Father and Mother sat happily together. Amy was drawing a picture of Meg and John, who were looking lovingly at each other. Beth lay on the floor, talking to her old friend,
Mr Laurence. Jo sat in her favourite chair with a serious, quiet look on her face. Laurie smiled at her in the long mirror that was opposite them both. And Jo smiled back.

SHORT STORY -Can-Can by Arturo Vivante(with sound)
“I’m going to go for a drive,” he said to...
AUDIO BOOKS

PANDORA-improve your reading -9
Shipwrecks For thousands of years, people have sailed across the...
AUDIO BOOKS
MAKE A COMMENT