'Where are you going?' Amy asked Meg and Jo one afternoon. 'I want to come, too.'
'You can't, dear, you're not invited,' said Meg.
'You're going somewhere with Laurie, I know you are!'
'Yes, we are,' said Jo. 'Now stop annoying us.'
'You're going to the theatre!' Amy said suddenly. 'I want to go with you!'
'We could take her, I suppose,' began Meg.
'No, Laurie only invited us,' said Jo.
'I shall go,' shouted Amy. 'Meg says I can.'
'You just stay where you are!' said Jo, angrily.
I'll make you sorry for this, Jo March!' Amy shouted, as Meg and Jo left the house.
The two older sisters enjoyed themselves at the theatre, but Jo couldn't stop worrying as she wondered what Amy would do to 'make her sorry'.
She found out the next afternoon.
Beth, Amy and Meg were sitting together when Jo ran into the room. 'Has anyone taken my notebook?' Jo asked.
Meg and Beth said 'No' at once, but Amy said nothing.
'Amy, you've got it,' said Jo.
'No, I haven't,' said Amy.
'That's a lie!' said Jo. 'Tell me the truth, or I'll make you!

'Do what you like,' said Amy. 'You'll never see your stupid book again, because I burned it!'
Jo's face went white. 'What! But I worked so hard writing my stories!'
'I said I'd make you sorry, and I have!' said Amy.
Jo jumped at Amy and shook her shoulders. 'You wicked, wicked girl!' cried Jo. I'll never, ever forgive you!' And she ran out of the room.
Mrs March came home and heard the story.
'Oh, how could you do that, Amy?' she said. 'That was Jo's book of stories. She wrote them all herself, and was hoping to make them good enough to print.'
Slowly, Amy began to understand the terrible thing she had done, and started to cry. Later, when Jo appeared for tea, Amy begged her sister to forgive her.

'I shall never forgive you,' Jo answered.
It was not a happy evening, and when singing time came, Jo remained silent. Afterwards, she kissed her mother and said 'Goodnight'.
'My dear, don't go to bed feeling so angry with your sister,' whispered Mrs March.
'I'm sorry, Mother, I can't forgive her,' replied Jo.
Next day, Jo wanted to get out of the house, so she picked up her skates and went next door to ask Laurie to take her skating.
Amy heard them going. 'Jo promised to take me with her next time!' she complained.
'It's hard for her to forgive you, Amy,' said Meg. 'Go after them and wait until Jo is enjoying herself, then give her a kiss or do something kind.'
It was not far to the river, but Jo and Laurie were already skating when Amy arrived. Jo saw Amy but turned away.
Laurie was carefully skating along the edge of the ice and didn't see the younger girl.
Amy put her skates on and stood on the ice.
'Keep near the edge. The ice isn't safe in the middle,'
Laurie called to Jo, then he disappeared round the first bend in the river.
Jo heard, but Amy did not. Jo realized that Amy probably hadn't heard, but she said nothing and skated after Laurie. 'Let Amy look after herself!' Jo thought.
Amy skated out towards the smoother ice in the middle of the river. Jo reached the bend, and for a moment she stood still, a strange feeling in her heart. Something made her turn round - just in time to see Amy throw up her
hands and go crashing through the ice into the cold water!
Amy gave a cry that made Jo's heart stop with fear. She tried to call Laurie, but her voice was gone, and for a second she could only stand and stare at the little blue hood of Amy's coat above the black water.
Suddenly, Laurie skated past her and shouted, 'Bring a piece of wood from the side of the river, quickly!'
Wild with fear, Jo fetched some wood and pulled it across the ice, while Laurie held Amy's head above the water. Together, they got her out.
She was more frightened than hurt, and was quickly taken home. 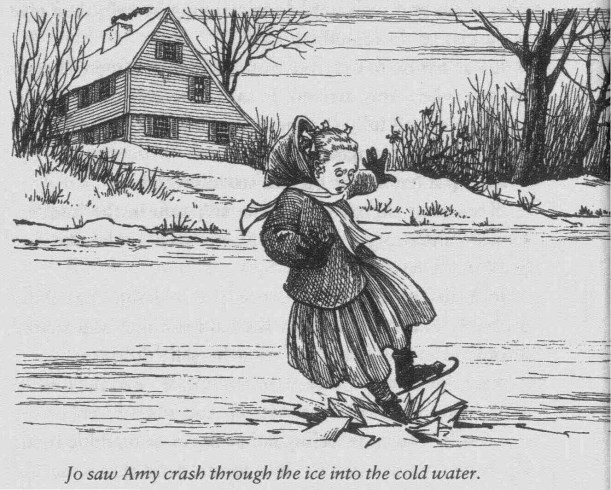 They covered her in blankets and tried to calm her, and after a little while she fell asleep in front of the warm fire. Later, when everything was quiet, Jo asked her mother, 'Are you sure she's safe?'
'Quite safe, dear. It was sensible to get her home as quickly as you did.'
'Laurie did it all,' said Jo. 'Mother, if she should die, it will be my fault. I get angry so quickly. Oh, why can't I be more like you?'

'I get angry nearly every day of my life, Jo,' said Mrs March, 'but I've learned not to show it. I've learned to stop myself saying the angry words that come to my lips, and you must try to do the same, my dear.' 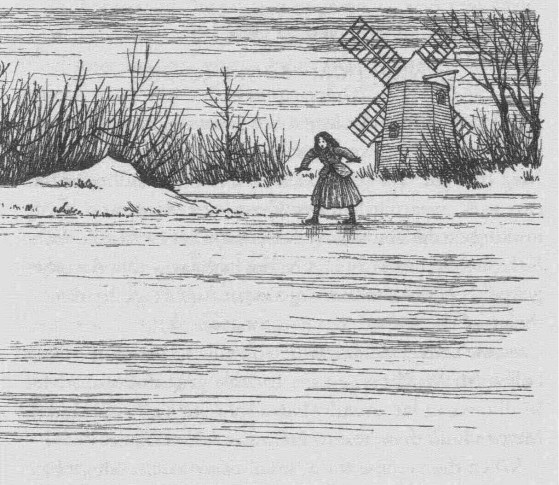 Amy moved in her sleep and Jo looked at her. 'I refused to forgive her, and today, she nearly died! And it was Laurie who saved her. How could I be so wicked?' Jo began to cry. Then Amy opened her eyes and held out her arms, with a smile that went straight to Jo's heart. Neither of them said a word, but they held each other close, and everything was forgiven and forgotten.

PANDORA-improve your reading -6
Frank Gehry For many landmarks, the architect’s vision and style...
AUDIO BOOKS
MAKE A COMMENT