When Beth woke from her long sleep, she looked into her mother's face and smiled. Then she slept again, but Mrs March held on to her daughter's thin little hand.
Hannah made breakfast while Meg and Jo listened as their mother told them about their father's health, and Mr Brooke's promise to stay with him. Then Meg and Jo closed their tired eyes and were able to rest at last. 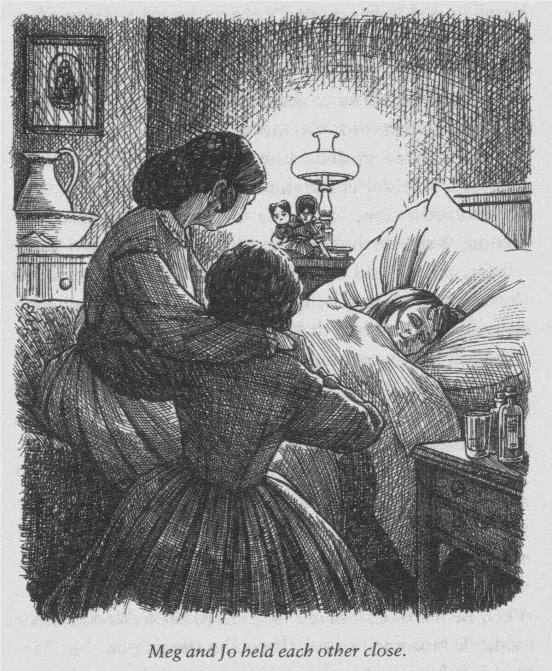 Laurie went to give the good news to Amy at Aunt March's house. He, too, was tired after the long night, and just managed to finish telling his story before he fell asleep in the chair.

Amy began to write a short letter to her mother, but before she could finish it, she saw Mrs March coming towards her aunt's house! Amy ran to meet her.
There were probably many happy little girls in the city that day, but Amy was the happiest of them all as she sat on her mother's knee. 'I've been thinking a lot about Beth,' she said. 'Everyone loves her because she isn't selfish. People wouldn't feel half so bad about me if I was sick, but I'd like to be loved and missed. I'm going to try and be like Beth as much as I can.'
Her mother kissed her. 'I'm sure you will succeed,' she said. 'Now I must go back to Beth. Be patient, little daughter, and we'll soon have you home again.'
That evening, while Meg was writing to her father, Jo went upstairs to Beth's room and found her mother beside the bed, as the little girl slept.
'I want to tell you something, Mother,' said Jo.
'Is it about Meg?' said Mrs March.
'How quickly you guessed!' said Jo. 'Yes, it's about her.
Last summer, Meg lost one of her gloves at the Laurences' picnic, and later Laurie told me that Mr Brooke had it, and kept it in his coat pocket. It fell out once, and Laurie saw it. Mr Brooke told Laurie that he liked Meg but was afraid to tell her because she was so young and he was so poor. Isn't it all awfulT
'Do you think Meg likes and cares about him?' asked Mrs March, with a worried look.
'I don't know anything about love!' said Jo.

'Do you think she's not interested in John?' said Mrs March.
'Who?' said Jo, staring.
'Mr Brooke,' said her mother. 'I call him John because we became good friends at the hospital.'
'Oh, dear!' said Jo. 'He's been good to Father, and now you'll let Meg marry him, if she wants to.' -'My dear, don't be angry,' said Mrs March. 'John told us quite honestly that he loved Meg, but said he would earn enough money for a comfortable home before he asked her to marry him. He wants very much to make her love him if he can. He's an excellent young man, but your father and I will not agree to Meg marrying before she is twenty.'
'I want her to marry Laurie, and be rich,' said Jo.
'I'm afraid Laurie isn't grown-up enough for Meg,' said
Mrs March. 'Don't make plans, Jo. Let time and their own hearts bring your friends together.'
Meg came in with the letter for her father.
'Beautifully written, my dear,' said her mother, looking at the letter. 'Please add that I send my love to John.'
'Do you call him John?' said Meg, smiling.
'Yes, he's been like a son to us and we are very fond of him,' said Mrs March, watching her daughter closely.
'I'm glad of that, because he's so lonely,' was Meg's quiet answer. 'Goodnight, Mother dear.'
Mrs March kissed her gently. 'She does not love John yet,' she thought, 'but she will soon learn to.'

IELTS READING (from 27 to 38)listen to the reading passage
A Workaholic Economy For the first century or so of...
AUDIO BOOKS IELTS IELTS-READING