Mrs March, the girls and Laurie were sitting together on a dull November afternoon when Hannah hurried into the room with a telegram. Mrs March read it, then dropped it to the floor, her face white and her hands shaking. Jo picked up the telegram and read it to the others in a frightened
voice. Mrs March: Your husband is very ill. Come at once. S. Hale, Blank Hospital, Washington.
The girls moved close to their mother. All their happiness had disappeared in a moment.
'I shall go at once,' said Mrs March, 'but it may be too late. Oh, my children!'
For several minutes, there was only the sound of crying, then Hannah hurried away to get things ready for the long journey.
'Where's Laurie?' Mrs March asked.
'Here,' said the boy. 'Oh, let me do something!'
'Send a telegram and say that I'll come at once,' said Mrs March. 'The next train goes early in the morning.
Now, I must write a note to Aunt March. Jo, give me that pen and paper.'
Jo knew that the money for the journey must be borrowed from Aunt March, and she too wanted to do something - anything - to help her father.
Laurie went off to take the note to Aunt March and to send the telegram. Jo went to fetch some things from the shops, and Amy and Meg helped their mother to get ready.
'Father will need good food and wine to help him get better, and there won't be much at the hospital,' said Mrs March. 'Beth, go and ask Mr Laurence for a couple of bottles of wine. I'm not too proud to beg for Father.'
Mr Laurence came back with Beth. He offered to go with Mrs March, but she wouldn't let the old gentleman make the long, tiring journey, although he could see that she would like to have somebody with her. He went away again, saying, I'll be back.'
Soon after, Meg saw Mr Brooke by the door.
I'm very sorry to hear your news, Miss March,' he said gently. 'Mr Laurence and I think it will be a good idea if I travel with your mother.'
'How kind you all are!' said Meg. 'It will be so good to know that there is someone to take care of Mother. Thank you very much!' She put out her hand and smiled gratefully
up into his warm brown eyes.
Laurie came back with a letter and money from Aunt March, but Jo did not return. It was late afternoon when she came walking in and gave her mother some money.
'That's to help make Father comfortable and to bring him home,' she said.
'Twenty-five dollars!' said Mrs March. 'My dear, where did you get it?'
Jo took off her hat.
'Your hair, your beautiful hair!' cried Amy.

All Jo's lovely, thick, long hair was cut short.
'Jo, how could you?' cried Meg.
'My dear girl, there was no need for this,' said Mrs March.
'She doesn't look like my Jo, but I love her dearly for doing it!' said Beth, and began to cry. 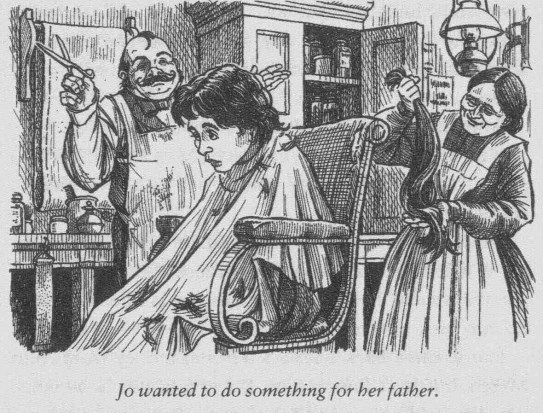 'Don't cry, Beth,' said Jo. 'I wanted to do something for Father, and selling my hair was the only thing I could think of doing. I'll soon have a curly head again, which will be
short and easy to keep tidy.'
But later, when Amy and Beth were asleep and Meg was lying awake, she heard Jo crying Are you crying about Father, Jo?' she asked.
'No, not now. It's my hair,' cried Jo. 'I'd do it again, if I could. But I did love my hair, and the selfish bit of me is making me cry. Don't tell anyone. I'll be all right in the morning.'
During the days after their mother and Mr Brooke went away, Meg and Jo went back to their jobs, and Beth and Amy helped Hannah to keep the house tidy. Everyone tried very hard to be good and hard-working and helpful.
News of their father came through, at first telling them he was dangerously ill, but then saying he was slowly getting better.

PANDORA-improve your reading -11
Cyber Crime As more people use the Internet and more...
AUDIO BOOKS