Annie Moffat did not forget her promised invitation, and one April day Meg went to stay at the Moffats' large house.
Meg thought it was wonderful. She loved riding in fine carriages, wearing her best dress every day, and doing nothing except enjoy herself. She soon began to talk about fashionable clothes and hairstyles in the way that the other girls did. And the more Meg saw of Annie's pretty things, the more she wished that she, too, was rich.
Annie's older sisters, Belle and Clara, were fine young ladies; Mr Moffat was a fat, friendly gentleman; and Mrs Moffat was a fat, friendly lady. They were all very kind to Meg and did their best to make her feel at home.
When the evening for a 'small party' came, Meg's best dress looked very old next to Sallie's new one, but no one said anything about it. The girls were getting ready when a servant brought in a box of flowers.
'For Miss March,' she said. 'And here's a letter.'
'What fun! Who are they from?' said the girls. 'We didn't know you had a young man.'
'The letter is from Mother and the flowers are from Laurie,' said Meg, simply.
'Oh,' said Annie, with a strange look.
Her mother's loving words and Laurie's kindness made
Meg feel much happier and she enjoyed the party very much. Annie made her sing, and someone said that Meg had a fine voice. So Meg was having a nice time - until she heard someone say, on the other side of a large table of flowers: 'How old is the Laurence boy?' 'Sixteen or seventeen, I think,' said another voice.
'It would be an excellent thing for one of those girls,' said a third voice. 'Sallie says they are very friendly, and the old man thinks they are all wonderful.'
'I expect Mrs M. has made her plans,' said Mrs Moffat's voice, 'but do you think the girl knows of them?'
'She told that little lie about her mother, and her cheeks went pink. I'm sure the note was from the boy really. Poor thing! She'd be very pretty if she had some nice clothes. Do you think she'll mind if we offer to lend her a dress for Thursday?'

'I shall ask young Laurence to come, and we'll have some fun with her afterwards.'
Meg tried to forget what she'd heard, but could not. The gossip made her angry, and she was glad when the party was over and she was alone in her bed. She cried quietly to herself. Why did people have to say those things?
She and Laurie were just friends, but now that friendship felt damaged by the unkind gossip.
The next day, Miss Belle said, 'Meg, dear, we've sent an invitation to your friend, Mr Laurence, for Thursday.'
Meg pretended to misunderstand. 'You're very kind, but I'm afraid he won't come. He's nearly seventy.'
Miss Belle laughed. I mean the young man.'

'There isn't one,' said Meg. 'Laurie is only a boy.'
'Isn't he about your age?' said Clara.
'Nearer Jo's,' said Meg. 'I'm seventeen in August.'
'It's nice of him to send you flowers,' said Annie.
'He often does, to all of us,' said Meg. 'My mother and old Mr Laurence are friends, you know.'
'What will you wear on Thursday?' asked Sallie.
'My white dress again, I haven't got any others.'
'No others?' said Sallie. 'How funny—'
'I have a pretty blue dress I can't wear any more, Meg,' said Belle. 'It will please me if you wear it.'
'You're very kind, but—,' began Meg.
'Please, do,' said Belle. 'You'll look quite beautiful in it.'
Meg couldn't refuse this kind offer and, on the Thursday evening, Belle helped to change Meg into a fine lady. She brushed and curled her hair, reddened her lips, then helped her to get into the sky-blue dress. The neck of the dress was cut very low, and Meg was quite shocked when she saw herself in the mirror. A necklace and earrings were added, and Meg was ready for the party.
At first, she felt strange in all the fine clothes, but she soon discovered that people who did not usually notice her now came to speak to her. Several young men who had only stared before now asked to be introduced.
Suddenly, Meg saw Laurie across the room. He was staring at her, and he didn't look very pleased. Meg began to feel uncomfortable, and she wished that she had worn her old dress. As she walked up to Laurie, she saw Belle and Annie watching them both and smiling. 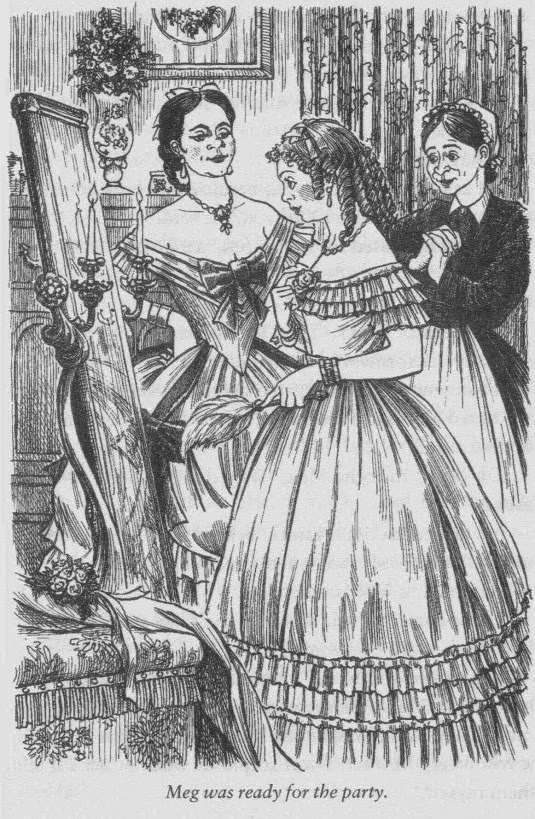 'I'm glad you came,' Meg said to Laurie, in her most grown-up voice. 'I was afraid you wouldn't.'
'Jo wanted me to come and tell her how you looked,' said Laurie.
'What will you tell her?'

I'll say I didn't know you, because you look so unlike yourself. I'm quite afraid of you,' he said.
'The girls dressed me up for fun,' said Meg. 'Don't you like it?'
'No, I don't,' came the cool reply.

Meg became angry. 'Then I shan't stay with you!' And she walked off towards the window.
A moment or two later, an older man went past her and she heard him say to his friend, 'That girl has been dressed up like a doll.'
'Oh dear,' thought Meg. 'Why didn't I wear my own things?'
She turned and saw Laurie behind her. 'Please forgive me,' he said. 'Come and have something to eat.'
Meg tried to look annoyed.
'Please come,' he said again. 'I don't like your dress, but I do think you are - wonderful.'
Meg smiled and found it impossible to stay angry with him. 'Please don't tell them at home about my dress,' she said. 'They won't understand that it was just for fun, and it will worry Mother. I was stupid to wear it, but I'll tell them myself.'

'I won't say anything,' he promised.
He did not see her again until supper time, when she was drinking wine with two other boys.
'You'll feel ill tomorrow, if you drink much of that, Meg,' Laurie whispered to her.
'I'm not Meg tonight,' she said. 'I'm a doll who does crazy things. Tomorrow, I'll be good again.'
Meg danced and laughed and talked to as many young men as she could manage, but went to bed feeling that she hadn't enjoyed herself as much as she had expected.

She was sick all the next day, and on Saturday went home, quite tired of her fortnight's fun.
'I'm glad to be home,' she said to her mother and Jo, after telling them how she was dressed up like a doll, drank too much wine, and was ill afterwards. She had laughed while telling them the story, but her face still looked worried at the end.
'There is something else, I think,' said Mrs March, smoothing Meg's cheek, which suddenly became rose-red.
'Yes,' Meg said slowly. 'I hate people saying and thinking awful things about us and Laurie.' Then she told them the gossip she had heard.
'What rubbish!' said Jo. 'Just wait until I see Annie Moffat! How stupid to think that Mother has "plans", and that we are kind to Laurie because he is rich and may marry one of us one day. He'll laugh when I tell him!'
'No, Jo,' said her mother. 'You must never repeat wicked gossip.

'Do you have "plans", Mother?' asked Meg.
'All mothers do, dear,' said Mrs March. 'But my plans are different from Mrs Moffat's, I suspect. I want my daughters to be loved, and I want people to think well of them. I want them to marry well, but not to marry rich men just because they are rich. I'd rather you were poor men's wives, if that meant you had happy, peaceful lives. But your father and I believe that we'll always be proud of our daughters, whether they are married or single.'
'You will, you will!' said Meg and Jo, together.

PANDORA-improve your reading -9
Shipwrecks For thousands of years, people have sailed across the...
AUDIO BOOKS

Academic Reading 13
HOW TO BECOME A KING? The boy who was to...
AUDIO BOOKS QuizLand Reading TOEFL TOEFL Reading YDS - YÖKDİL YDS-YÖKDİL READING