Laurie quickly realized that Jo was keeping a secret which she refused to tell him, but he guessed the secret was about Meg and Mr Brooke, and was annoyed that his tutor had said nothing. He began to make some private plans of his own. Meg, meanwhile, was busy getting things ready for her father's return, but a change suddenly seemed to come over her. For a day or two, she jumped when she was spoken to, and there was a worried look on her face.
Then a letter arrived for her, and a few minutes later Mrs March and Jo saw Meg staring at it with a frightened face.
'My child, what is it?' said Mrs March.
'It's a mistake - he didn't send it. Jo, how could you do it?' Meg hid her face in her hands and cried.
'Me? I've done nothing,' said Jo. 'What's she talking about?'
Meg pulled another letter from her pocket and threw it at Jo. 'You wrote it, and that bad boy helped you. How could you be so cruel and mean to us both?'
Jo and her mother read the letter which had been in Meg's pocket.
My dearest Meg, I can no longer bide my love for you, and must know your answer before I return. I cannot tell your parents yet, but I think they will agree if they know that we love one another. Mr Laurence will help me find a good job, and then, my sweet girl, you will make me happy. Say nothing to your family yet, but send a word of hope to me through Laurie. Your loving John.
'That terrible boy!' said Jo. I'lll make him sorry.'
But her mother said, 'Wait, Jo. Are you sure this is nothing to do with you?'
'I never saw the letter before!' said Jo. 'But Mr Brooke wouldn't write stupid things like that.'
'It's like his writing,' said Meg unhappily, looking at the second letter in her hand.
'Oh, Meg, you didn't answer it?' said Mrs March.
'Yes, I did!' cried Meg, hiding her face again.

'Let me get that wicked boy!' shouted Jo.
Mrs March sat beside Meg. 'Tell me everything.'
'Laurie brought the first letter,' said Meg. 'He didn't seem to know anything about it. I was going to tell you, but I remembered how you liked Mr Brooke and thought it would be all right to keep my little secret for a while.
Now I can never look him in the face again.'

'What did you write to him?' asked Mrs March.
'I only said that I was too young to do anything, and that I didn't wish to have secrets from you so he must speak to Father. I thanked him for his kindness and said I would be his friend, but nothing more, for a long time.'
Mrs March smiled and looked pleased.
Jo laughed.'What did he reply to that?

'He writes here that he never sent any love letter, and is sorry that my sister Jo should play games with us like this,' said Meg. 'It's a very kind letter, but imagine how awful I feel.'
'I don't believe Brooke saw either of those letters,' said
Jo. 'Laurie wrote them both and he's keeping yours because I won't tell him my secret.'
'Go and fetch Laurie, Jo,' said Mrs March. I'll put a stop to all this at once.'
Away ran Jo, and Mrs March gently told Meg Mr Brooke's real feelings. 'Now, dear, do you love him enough to wait until he can make a home for you?'
'I'm frightened and worried,' answered Meg. 'I don't want anything to do with love for a long time - perhaps never. If John doesn't know about all this, don't tell him, and please make Jo and Laurie keep quiet.'
Mrs March tried to calm her daughter, but as soon as Meg heard Laurie coming back with Jo, she ran out of the room, and Mrs March saw the boy alone. When Laurie saw Mrs March's angry face, he guessed the reason. Jo waited outside the room as, inside, the voices rose and fell for half an hour. But the girls never knew what was said.
When they were called in, Laurie apologized to Meg, and told her that Mr Brooke knew nothing about either of the two letters. 'Please forgive me, Meg,' he said.
I'll try,' said Meg, 'but I didn't think you could be so unkind.'
Laurie looked so sorry that Jo wanted to forgive him straight away, but she said nothing and refused even to look at him. When he went away, looking hurt and unhappy, Jo wished she had been more forgiving. She could never stay angry for long, so after a while she hurried over to the big house, taking with her as an excuse one of Mr Laurence's books that she had borrowed.
'Is Mr Laurence in?' Jo asked a servant.
'Yes, miss, but you can't see him,' said the servant.
'Why? Is he ill?' said Jo.
'No, miss, but he's been arguing with Mr Laurie.'
'Where's Laurie?' said Jo.
'He's shut in his room, and he won't come out.'
I'll go and see what's the matter,' said Jo. I'm not afraid of either of them.'
She went upstairs and knocked on Laurie's door.
'Stop that!' shouted Laurie.

Jo immediately knocked again and the door flew open.
She stepped inside before Laurie could stop her. 'I've come to say that I forgive you,' she said, 'and I won't stay angry with you.'
'Oh,' said Laurie. 'Thank you.'
'What's wrong?' she said, seeing his unhappy face.
'I wouldn't tell Grandfather why your mother wanted to see me, because I promised her not to tell anyone,' he said. 'But then Grandfather tried to shake the truth out of me, so I came up here and shut myself in.'
'I expect he's sorry he did that,' said Jo. 'Go down and say you're sorry. I'll help you. 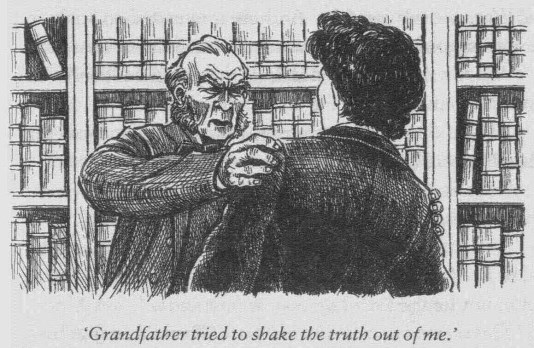 'No, I won't!' said Laurie angrily. 'I was sorry about Meg, and I asked her to forgive me, but I won't do it again when I'm not the one who is wrong. He ought to believe me when I say I can't tell him something. I don't like being shaken like that, and I won't go down until he apologizes.'
'Listen, if I get your grandfather to apologize for shaking you, will you go down?' said Jo.
'Yes, but you won't do it,' answered Laurie.
'If I can manage the young one, then I can manage the old one,' Jo said to herself as she went downstairs.
'Come in!' said Mr Laurence, when she knocked on his door.
'It's me, sir,' said Jo. 'I'm returning a book.'
'Do you want any more?' said the old man, looking annoyed but trying not to show it.

'Yes, please,' said Jo. And she pretended to look for another book while Mr Laurence stared at her crossly.
'What's that boy been doing?' he asked suddenly. 'He won't tell me.'
'He did do something wrong and we forgave him,' said Jo, 'but we all promised not to say a word to anyone.'
'He must not hide behind a promise from you soft-hearted girls,' said the old gentleman. 'Tell me, Jo.'
'I can't, sir, because Mother has ordered me not to,' said Jo. 'And if I tell you, it will make trouble for someone else, not Laurie.'

This seemed to calm the old man. 'Then I'll forgive him,' he said after a moment. 'He's a difficult boy and hard to manage, you know.'
'So am I,' said Jo, 'but a kind word always helps.' You think I'm not kind to him?' he said sharply.
'Too kind, very often,' said Jo, a little afraid, 'but just a bit quick to be angry with him sometimes.'
The old gentleman looked a little ashamed. 'You're right, I am. Although I love the boy, I find it hard to be patient with him sometimes. Bring him down and tell him it's all right. I'm sorry I shook him.'
'Why not write him an apology, sir?' said Jo. 'He says he won't come down until he's got one.'
Mr Laurence gave her another sharp look, but then smiled and put on his glasses. 'Here, give me a bit of paper,' he said.
The words were written and Jo kissed the old man's cheek. Then she went upstairs and put the letter under Laurie's door. But he came out before she was gone.
'Well done, Jo,' he said. 'Did he shout at you?'
'No, he was quite calm,' said Jo. 'Now, go and eat your dinner. You'll both feel better after it.'
Everyone thought the matter was ended, but although others forgot it, Meg remembered. She never talked about Laurie's tutor but she thought of him often and dreamed her dreams. And once, when Jo was looking for something in her sister's desk, she found a bit of paper with 'Mrs John Brooke' written on it over and over again.
'Oh, dear!' said Jo.

IELTS READING (from 1 to 12)-listen to the reading passage
THE BEAM-OPERATED TRAFFIC SYSTEM The Need for Change The number...
AUDIO BOOKS IELTS IELTS-READING