THE WIZARD OF OZ AUDIO BOOK :CHAPTER 5: THE COWARDLY LION

The yellow brick road went on through the forest and Dorothy was becoming a little afraid.
"How big is this forest?" the girl asked the Tin Man. "Are we far from the Emerald City?"
"1 don't know," the Tin Man replied. "There may be wild animals living here, but don't worry. Animals don't eat straw or tin. You are made of flesh, but you are safe because the good Witch has kissed you."
"But what about my dog, Toto?" Dorothy asked. At that moment, they all heard a terrible sound. It was the roar of a Lion! Then the Lion ran onto the road and knocked over the Scarecrow. 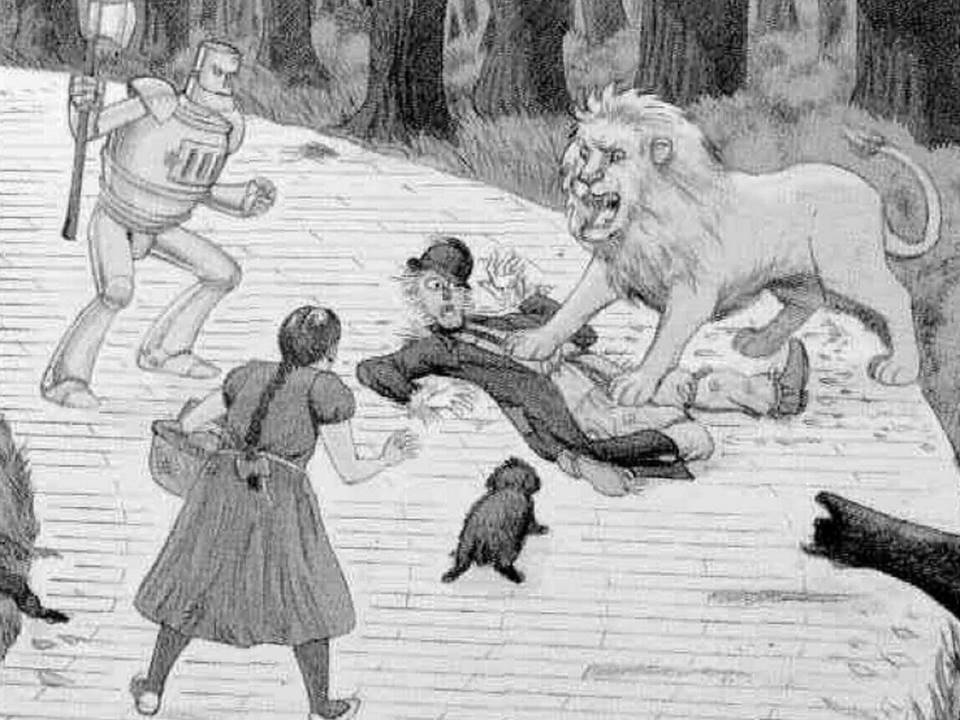 With another roar, the Lion knocked over the Tin Man too.
Toto was very brave. He ran up to the Lion, barking loudly. The Lion opened his mouth.
"No, no!" Dorothy shouted and she hit the Lion on his nose. "How dare you! You coward36! How dare you bite a poor little dog!"
"I didn't bite him. I only opened my mouth," the Lion said. "I am a coward and I am afraid of everything. When I
roar, my heart beats very fast because I have no courage."
"At least you have a heart," the Tin Man said. "I don't. I am going to ask the Wizard of Oz for one."
"You have brains too," the Scarecrow said to the
Cowardly Lion. "I don't. But I am going to ask the Wizard of Oz for some."
"Toto and I want to go home to Kansas. I am going to ask Oz to help us get back there," Dorothy said.
"Do you think that Oz can give me courage?" the Cowardly Lion asked. "Then I wouldn't be a coward anymore."
"The Wizard of Oz is very powerful," Dorothy replied.
"You are welcome to come with us and ask him."
And so they went on their way. The Scarecrow carried Dorothy's basket and the Cowardly Lion walked by her side. Toto was afraid of the huge animal at first, but they soon
became friends. That night, they had to sleep in the forest. The Tin Man cut down a tree and made a fire with the wood. Dorothy and Toto ate the last of their bread.
"There is no food for breakfast," Dorothy said.
"I can kill an animal for you," the Cowardly Lion told her.
"Then you can cook it on the fire."
"I think that it is wrong to kill anything," the Tin Man said. "But as I have no heart, I am not sure."

The Cowardly Lion did not answer. He went into the forest and was away for some time.
The Scarecrow found a nut tree and he picked some nuts.
"Put them in your basket, my dear," he said to Dorothy.
"You can have them for breakfast. Now you and Toto must sleep. I will stand under this tree, away from the fire."
Dorothy and Toto slept well. In the morning, the girl ate the nuts and drank some water from a stream. Soon, all the friends were walking along the yellow brick road again.
It was not an easy day. After a time, they came to a very wide ditch. The ditch divided the forest in two and it was too wide to cross. Dorothy walked to the edge of the ditch and looked into it.
"We can't climb down there," she said. "The ditch is too deep and there are rocks at the bottom. What can we do?"
The Scarecrow and the Tin Man looked at each other, but they did not speak. The Cowardly Lion walked to Dorothy's side and looked across the ditch.
"I think that I could jump over it," the Cowardly Lion said at last.
"Then you can carry us on your back," the Scarecrow said. "Take me first. If I fall, the rocks won't hurt me."
"If I fall, I will be killed," the Lion replied. "That makes me very afraid. But get on my back. I will try to jump across."
So the Scarecrow got on the Lion's back and the animal did a great jump. When he landed safely on the other side, the Tin Man and Dorothy shouted happily.
The Lion jumped back for Dorothy and Toto.
"Hold on!" the Cowardly Lion cried and he jumped again.
When Dorothy was safe on the other side, the Lion went back for the Tin Man. Then the huge animal had to rest. The forest was dark now, but the yellow brick road went on.

"Will this forest never end?" Dorothy asked sadly.
They walked on and soon they came to another ditch.
"I'm sorry, but I can't jump that. It is too wide," the Cowardly Lion said. "What can we do now?"
"I have an idea," the Scarecrow said at last. "Look, there is a tall tree next to the ditch. If the Tin Man cuts the tree down, it will fall across the ditch like a bridge. Then we can all walk across to the other side."
"That is a great idea," the Lion said.
The Tin Man picked up his axe and began to work at once. He chopped at the tree for some time. When it was ready to fall, the Lion pushed the tree hard and it fell across the ditch. Now they could all walk to the other side.
Dorothy went first, with Toto in her arms. The Tin Man followed, then the Scarecrow. The Lion came last of all.
Dorothy was very tired so the Lion carried her on his back.