Dorothy was feeling hungry. She went into the house and found some bread. She gave some bread to Toto and ate some herself. Then she picked some fruit and drank some
water from the stream. A clean blue and white dress was hanging by Dorothy's bed. The girl washed herself carefully and put on the dress. Then she put some more bread in her basket. She picked
some more fruit and put that in the basket too.
Dorothy looked down at her shoes. They were old and dirty. Then she looked at the Wicked Witch's Silver Shoes.
"I will wear them if they will fit me," she said to herself, and she put them on. Toto barked loudly and wagged his tail.
"Come along, Toto," Dorothy said. "We will go to the Emerald City and see the Wizard of Oz. This is a beautiful country, but I must get back home to Kansas."
The brave girl picked up her basket and shut the door of the house behind her. Then they started on their journey. Soon they found the yellow brick road and walked along it happily. There were fields on both sides of the road. All the houses that Dorothy saw were painted blue—the Munchkins'
color.
In the evening, Dorothy was very tired and she wanted somewhere to sleep. Then she saw a large Munchkin house.
It was painted blue, like the other Munchkin houses. But this house belonged to a very rich Munchkin. He had invited his friends to supper and the food was on two long tables in front of the house. Music was playing and the Munchkins were all dancing on the grass.

The rich Munchkin looked at Dorothy's Silver Shoes.
"You are young, but you must be a very good witch," he said.

"Why?" Dorothy asked in surprise.
"You are wearing the Silver Shoes. They belonged to the Wicked Witch of the East. This means you have killed her," the Munchkin explained. "Please eat with us. Your little dog can have some food too. And I have a room where you can sleep."
After her supper, Dorothy was very tired. She was taken into a room where everything was blue. The bed was very soft with blue sheets. Dorothy and Toto fell asleep at once.
When Dorothy woke up, breakfast was ready for her. After she had eaten, the girl asked the Munchkin a question.
"How far away is the Emerald City where the Wizard of Oz lives?" she asked. "I want to see him."
"The Wizard never sees anyone," the Munchkin replied.
"And many people are frightened of him. It is a long way to the Emerald City and the journey will be dangerous."
"But I want to get home to Kansas and the Great Wizard is the only one who can help me," Dorothy said bravely. "So I must go to the Emerald City. Goodbye and thank you."
And Dorothy and Toto started on their journey again.
After they had walked several miles along the yellow brick road, Dorothy sat down to rest. There was a big cornfield by the side of the road. In the middle of the field was a Scarecrow. It was fixed onto a pole.
The Scarecrow's head was made from a sack which was stuffed with straw. He had two painted blue eyes, a nose, and a mouth.
Dorothy looked at the Scarecrow and smiled.
"We have scarecrows in Kansas too," she said. "They scare the crows and stop them eating the corn."
"That's right," the Scarecrow said.
Dorothy looked at the Scarecrow in surprise.
"But our scarecrows in Kansas don't talk," she said.
"I don't talk much," the Scarecrow replied. "I'm standing here because I can't get down. The crows are not scared of me. They have brains and I don't."
"Oh dear," Dorothy said kindly. "Perhaps I can help you."
She stood up and lifted the Scarecrow down from the pole. He was dressed like a Munchkin, in blue clothes. 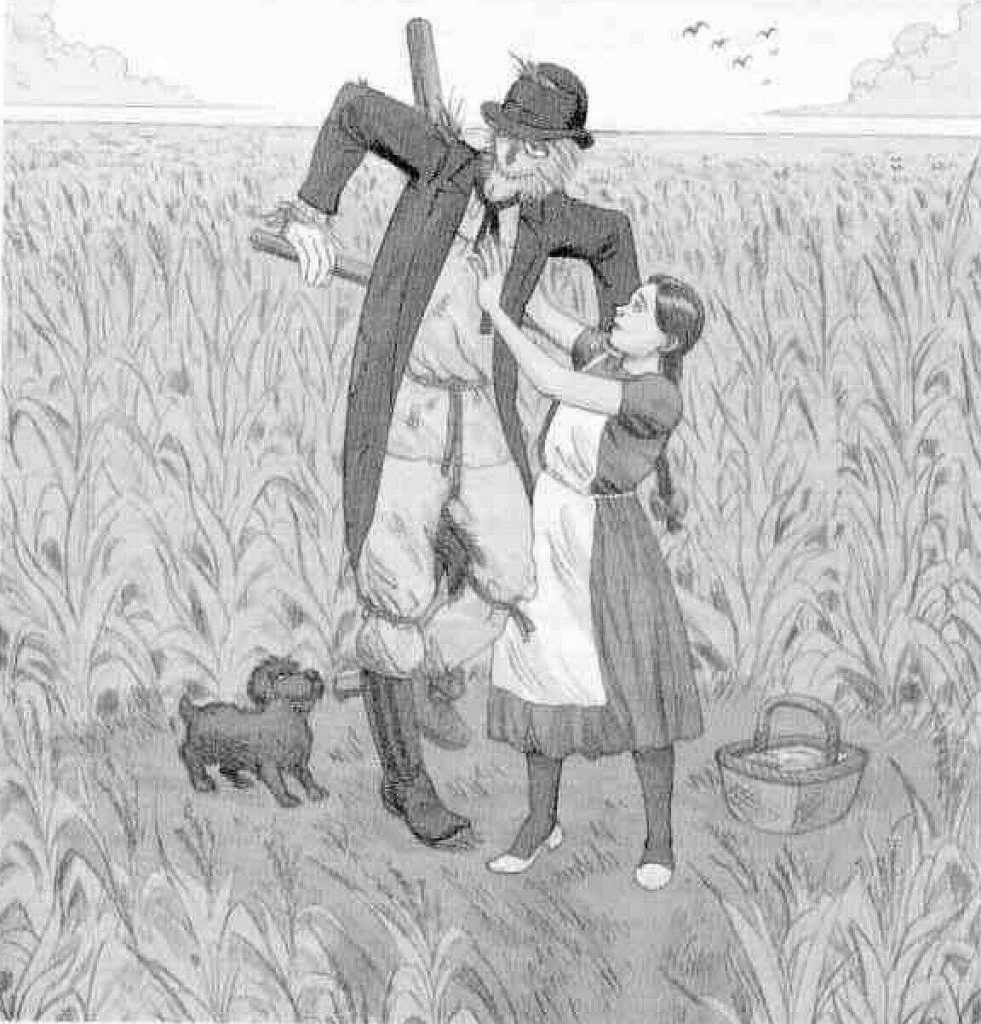 "That's better. I can move my legs now," the Scarecrow said. "What is your name, my dear? Where are you going?"
"My name is Dorothy. I am going to the Emerald City to see the Great Wizard of Oz. I want to go home to Kansas."
"The Emerald City? The Wizard of Oz? Kansas? I don't know anything about these things because I have no brains," the Scarecrow said sadly. "My head is stuffed with straw."
"Well, Kansas is my home," Dorothy said. "And there is no place like home, you know. The Wizard of Oz lives in the Emerald City. He is very clever. I hope that he can get me back to Kansas."
"Do you think that Oz would give me some brains?" asked the Scarecrow.
"I don't know," Dorothy replied. "Why don't you come with me and ask him?"
"Thank you," the Scarecrow said. "That is a good idea."
As they began to walk, Toto barked at the Scarecrow. The little dog had never seen a straw man before.
"Don't be afraid. Toto won't bite you," Dorothy said.
"I'm not afraid," the Scarecrow replied. "I'm only afraid of one thing."
"What is that?" asked Dorothy.
"Fire," the Scarecrow replied.
They walked all day. In the evening, they came to a great forest. It was dark under the trees, but the yellow brick road went on into the darkness. Dorothy could not see and she held the Scarecrow's arm.
"I must rest soon. I have been walking all day," she said.
"Well, I feel sorry for you. I never get tired, because I have no brains," the Scarecrow replied. "I can see a little house under the trees. Shall we stay there tonight?"
"Yes, please," Dorothy said. She went inside the little house and fell asleep at once. Toto was soon asleep too. The Scarecrow, who never got tired, stood by the door all night.

AUDIO BOOK THE GREAT GATSBY
The Great Gatsby is a story told by Nick Carraway, who was once Gatsby's neighbor, and...
AUDIO BOOKS

LISTEN TO THE IELTS READING PASSAGE -a new concept!
Stepwells A millennium ago, stepwells were fundamental to life in the driest parts of...
AUDIO BOOKS IELTS IELTS-Listening- Level 3 IELTS-READING

Academic Reading 13
HOW TO BECOME A KING? The boy who was to...
AUDIO BOOKS QuizLand Reading TOEFL TOEFL Reading YDS - YÖKDİL YDS-YÖKDİL READING
MAKE A COMMENT