THE WIZARD OF OZ AUDIO BOOK :CHAPTER 11: THE WICKED WITCH OF THE WEST

CHAPTER 11 : THE WICKED WITCH OF THE WEST

The friends got up early the next morning and had a good breakfast. The green girl filled Dorothy's basket with food. Then the green soldier took them back to the gate.
"Which road will take us to the Wicked Witch of the West?" Dorothy asked the Guardian of the Gate.
"There isn't a road," he replied. "No one goes that way."

"How can we find her then?" Dorothy asked. The Guardian of the Gate laughed.
"Don't worry. The Wicked Witch will find you!" he told her. "And when she finds you, she will make you her slaves."
"But we are going to kill her," said the Scarecrow.
"The Witch may not let you kill her," the Guardian of the Gate explained. "She is very wicked and she may kill you.
But if you want to find her, follow the sun and walk towards the West."
So the friends began to walk towards the West and away from the Emerald City. Soon, Dorothy's green dress turned white and Toto's green ribbon went white too.
As they went on, walking became difficult. The ground was hard and there were no farms or houses. The sun was hot and there were no trees. Dorothy, Toto and the Lion soon became very tired. They fell asleep before it was dark and the Scarecrow and the Tin Man stood near them.
The Wicked Witch of the West had only one eye, but she could see everything. She saw Dorothy first. The girl was fast asleep, with her friends all around her.
The Wicked Witch was very angry and she blew on her silver whistle. Almost at once, a pack of wolves ran towards her. The animals had long legs, red eyes and sharp teeth.
"Go and tear those strangers into pieces!" the Wicked Witch told the Leader of the wolves.

"Don't you want to use them for slaves?" the Leader of the wolves asked.
"No, they are no use to me," the Wicked Witch replied. "One is made of tin and one of straw. The girl and the lion won't be able to work for me. Tear them into pieces."
"We will!" the Leader said and the wolves all ran towards the strangers. 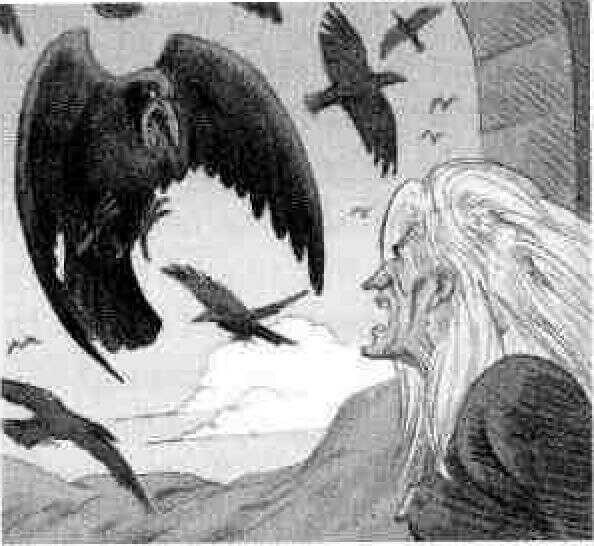 The Scarecrow and the Tin Man saw the wolves coming.
"Leave this to me," the Tin Man said, and he raised his axe. As the Leader of the wolves ran up, the Tin Man swung his axe. The wolf's head was cut from its body.
There were forty wolves. The Tin Man raised his axe forty times. Forty heads were cut off and all the wolves were dead.
Then the Tin Man sat down and smiled.
"That was a good fight," he said to the Scarecrow.
When Dorothy woke up in the morning, she saw the wolves' heads and bodies all around her. At first, she was afraid, but then the Tin Man told the girl everything.
"Thank you for saving my life," she replied. Then she hugged him.
After a good breakfast, the friends started on their way.
The Wicked Witch looked out of the door of her castle.
First, she saw all the dead wolves. Then she saw the strangers walking through her country and she was very, very angry.
The Witch blew her silver crows flew towards her.
"Peck out the strangers' eyes! Tear them to pieces!" the Wicked Witch said to the King Crow.
"Right!" the King Crow replied.
When Dorothy saw the black crows coming she was very afraid.

"Don't worry," the Scarecrow said. "Leave this to me." When the crows saw the Scarecrow, at first they were afraid of him. But then the King Crow said, "He's only stuffed with straw. I will peck his eyes out."
The King Crow flew down, but the Scarecrow caught him. He twisted the bird's neck until it was dead.
One by one, the crows flew at the Scarecrow. He caught each one and twisted its neck. Soon, the forty black crows were dead.

"You are safe now," the Scarecrow said to his friends. And they started on their way again.
When the Wicked Witch saw the dead crows, she was more angry than before. She blew three times on her silver whistle and a swarm of black bees came flying towards her.
"Sting those strangers to death!" she cried. "Be quick!"
But the Scarecrow saw the bees coming and he knew what to do.
"Take out my straw and cover the girl, the dog and the Lion with it," the Scarecrow said to the Tin Man. "Then the bees can't sting them."
So when the bees came, there was only the Tin Man to sting. But when they flew at him, the bees broke their stings and they all died.
Then Dorothy and the Lion got up. They helped the Tin Man put the straw back into the Scarecrow and they all started on their way again.
The Wicked Witch was so angry that she jumped up and down. Then she called the Winkies, who were her slaves. She gave them sharp spears to fight with.

IELTS READING (from 27 to 40)-listen to the reading passage
A.D.D. - Missing Out on Learning Study requires a student's...
AUDIO BOOKS IELTS IELTS-READING
MAKE A COMMENT