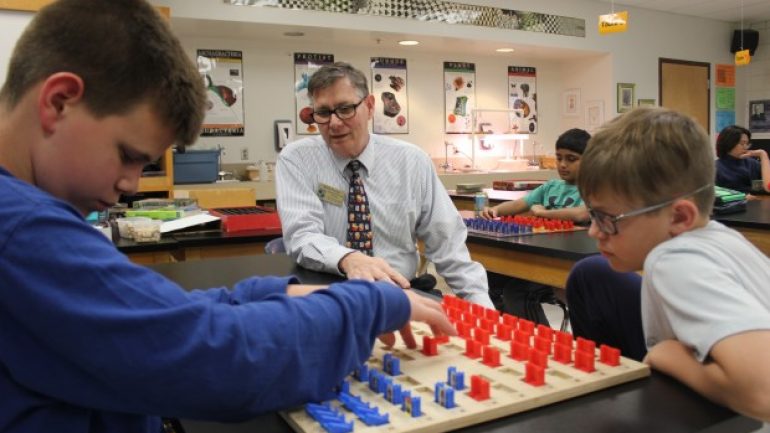 PDF:VISUAL SYMBOLS AND THE BLIND

PDF:VISUAL SYMBOLS AND THE BLIND QUESTIONS

Visual Symbols and the Blind

Part 1
From a number of recent studies,Q1 it has become clear that blind people can appreciate the use of outlines and perspectives to describe the arrangement of objects and other surfaces in space. But pictures are more than literal representations.

Q2 This fact was drawn to my attention dramatically when a blind woman in one of my investigations decided on her own initiative to draw a wheel as it was spinning. To show this motion, she traced a curve inside the circle (Fig. 1). I was taken aback. Lines of motion, such as the one she used, are a very recent invention in the history of illustration. Indeed, as art scholar David Kunzle notes, Wilhelm Busch, a trend-setting nineteenth-century cartoonist, used virtually no motion lines in his popular figures until about 1877. Fig. 1

When I asked several other blind study subjects to draw a spinning wheel, one particularly clever rendition appeared repeatedly: several subjects showed the wheel’s spokes as curved lines. When asked about these curves, they all described them as metaphorical ways of suggesting motion. Majority rule would argue that this device somehow indicated motion very well. But was it a better indicator than, say, broken or wavy lines – or any other kind of line, for that matter? The answer was not clear. So I decided to test whether various lines of motion were apt ways of showing movement or if they were merely idiosyncratic marks. Moreover, I wanted to discover whether there were differences in how the blind and the sighted interpreted lines of motion.

To search out these answers, I created raised-line drawings of five different wheels, depicting spokes with lines that curved, bent, waved, dashed and extended beyond the perimeter of the wheel. I then asked eighteen blind volunteers to feel the wheels and assign one of the following motions to each wheel: wobbling, spinning fast, spinning steadily, jerking or braking. My control group consisted of eighteen sighted undergraduates from the University of Toronto.

In addition, the favoured description for the sighted was the favoured description for the blind in every instance. What is more, the consensus among the sighted was barely higher than that among the blind. Because motion devices are unfamiliar to the blind, the task I gave them involved some problem solving. Evidently, however, Q3 the blind not only figured out meanings for each line of motion, but as a group they generally came up with the same meaning at least as frequently as did sighted subjects.

We have found that the blind understand other kinds of visual metaphors as well. One blind woman drew a picture of a child inside a heart – choosing that symbol, she said, to show that love surrounded the child. With Chang Hong Liu, a doctoral student from China, I have begun exploring how well blind people understand the symbolism behind Q8 shapes such as hearts that do not directly represent their meaning.

All our subjects deemed the circle soft and the square hard. A full 94% ascribed happy to the circle, instead of sad. But other pairs revealed less agreement: 79% matched fast to slow and weak to strong, respectively. And only 51% linked Q11 deep to circle and shallow to square. (See Fig. 2.) When we tested four totally Q12 blind volunteers using the same list, we found that their choices closely Q13 resembled those made by the Q10 sighted subjects. One man, who had been blind since birth, scored extremely well. He made only one match differing from the consensus, assigning ‘far’ to square and ‘near’ to circle. In fact, only a small majority of sighted subjects – 53% – had paired far and near to the opposite partners. Thus,Q14  we concluded that the blind interpret abstract shapes as sighted people do.

B can draw outlines of different objects and surfaces.

C can recognise conventions such as perspective.

2 The writer was surprised because the blind woman

A drew a circle on her own initiative.

B did not understand what a wheel looked like.

D was the first person to use lines of motion.
Answer: C

3 From the experiment described in Part 1, the writer found that the blind subjects

A had good understanding of symbols representing movement.

B could control the movement of wheels very accurately.

C worked together well as a group in solving problems.

D got better results than the sighted undergraduates.
Answer: A

Look at the following diagrams (Questions 4-6), and the list of types of movement below.

Match each diagram to the type of movement A-E generally assigned to it in the experiment.

Choose the correct letter A-E and write them in boxes 4-6 on your answer sheet.

E use of brakes

Complete the summary below using words from the box.

NB You may use any word more than once.

In the experiment described in Part 2, a set of word 7 Answer: pairs was used to investigate whether blind and sighted people perceived the symbolism in abstract 8 Answer: shapes in the same way. Subjects were asked which word fitted best with a circle and which with a square. From the 9 Answer: sighted  volunteers, everyone thought a circle fitted ‘soft’ while a square fitted ‘hard’. However, only 51% of the 10 Answer: sighted volunteers assigned a circle to 11 Answer: deep When the test was later repeated with 12 Answer: blind volunteers, it was found that they made 13 Answer: similar choices.

IELTS READING (from 1 to 15)-listen to the reading passage
DESTINATIONS FOR INTERNATIONAL ENGLISH STUDENTS Paragraph (i) At any given...
IELTS IELTS-READING