IELTS READING (from 1 to 13)listen to the reading passage 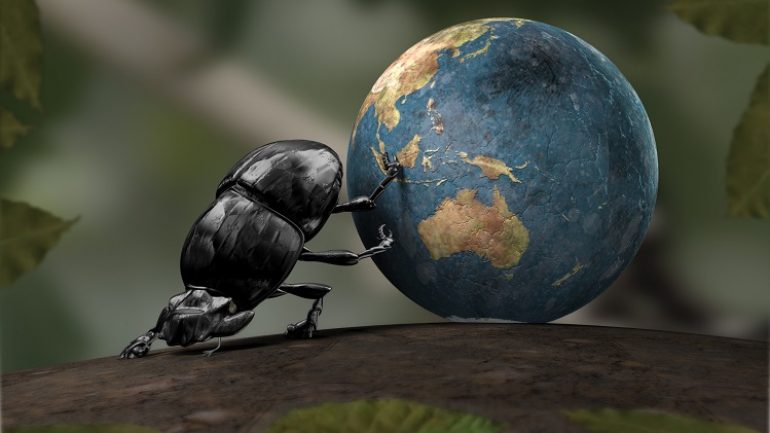 Some of the most remarkable beetles are the dung beetles, which spend almost their whole lives eating and breeding in dung’. More than 4,000 species of these remarkable creatures have evolved and adapted to the world’s different climates and the dung of its many animals. Australia’s native dung beetles are scrub and woodland dwellers, specialising in coarse marsupial droppings and avoiding the soft cattle dung in which bush flies and buffalo flies breed.

In the early 1960s George Bornemissza, then a scientist at the Australian Government’s premier research organisation, the Commonwealth Scientific and Industrial Research Organisation (CSIRO), suggested that dung beetles should be introduced to Australia to control dung-breeding flies. Between 1968 and 1982, the CSIRO imported insects from about 50 different species of dung beetle, from Asia, Europe and Africa, aiming to match them to different climatic zones in Australia. Of the 26 species that are known to have become successfully integrated into the local environment, only one, an African species released in northern Australia, has reached its natural boundary.

Introducing dung beetles into a pasture is a simple process: approximately 1,500 beetles are released; a handful at a time, into fresh cow pats 2 in the cow pasture. The beetles immediately disappear beneath the pats digging and tunnelling and, if they successfully adapt to their new environment, soon become a permanent, self-sustaining part of the local ecology. In time they multiply and within three or four years the benefits to the pasture are obvious.

Dung beetles work from the inside of the pat so they are sheltered from predators such as birds and foxes. Most species burrow into the soil and bury dung in tunnels directly underneath the pats, which are hollowed out from within. Some large species originating from France excavate tunnels to a depth of approximately 30 cm below the dung pat. These beetles make sausage-shaped brood chambers along the tunnels. The shallowest tunnels belong to a much smaller Spanish species that buries dung in chambers that hang like fruit from the branches of a pear tree. South African beetles dig narrow tunnels of approximately 20 cm below the surface of the pat. Some surface-dwelling beetles, including a South African species, cut perfectly-shaped balls from the pat, which are rolled away and attached to the bases of plants.

For maximum dung burial in spring, summer and autumn, farmers require a variety of species with overlapping periods of activity. In the cooler environments of the state of Victoria, the large French species (2.5 cms long) is matched with smaller (half this size), temperate-climate Spanish species. The former are slow to recover from the winter cold and produce only one or two generations of offspring from late spring until autumn. The latter, which multiplies rapidly in early spring, produce two to five generations annually. The South African ball-rolling species, being a subtropical beetle, prefers the climate of northern and coastal New South Wales where it commonly works with the South African tunnelling species. In warmer climates, many species are active for longer periods of the year.

Dung beetles were initially introduced in the late 1960s with a view to controlling buffalo flies by removing the dung within a day or two and so preventing flies from breeding. However, other benefits have become evident. Once the beetle larvae have finished pupation, the residue is a first-rate source of fertiliser. The tunnels abandoned by the beetles provide excellent aeration and water channels for root systems. In addition, when the new generation of beetles has left the nest the abandoned burrows are an attractive habitat for soil-enriching earthworms. The digested dung in these burrows is an excellent food supply for the earthworms, which decompose it further to provide essential soil nutrients. If it were not for the dung beetle, chemical fertiliser and dung would be washed by rain into streams and rivers before it could be absorbed into the hard earth, polluting water courses and causing blooms of blue-green algae. Without the beetles to dispose of the dung, cow pats would litter pastures making grass inedible to cattle and depriving the soil of sunlight. Australia’s 30 million cattle each produce 10-12 cow pats a day. This amounts to 1.7 billion tonnes a year, enough to smother about 110,000 sq km of pasture, half the area of Victoria.

Dung beetles have become an integral part of the successful management of dairy farms in Australia over the past few decades. A number of species are available from the CSIRO or through a small number of private breeders, most of whom were entomologists with the CSIRO’s dung beetle unit who have taken their specialised knowledge of the insect and opened small businesses in direct competition with their former employer.

Glossary
1.  dung:- the droppings or excreta of animals
2.  cow pats:- droppings of cows

1       Bush flies are easier to control than buffalo flies.
2       Four thousand species of dung beetle were initially brought to Australia by the CSIRO.
3       Dung beetles were brought to Australia by the CSIRO over a fourteen-year period.
4       At least twenty-six of the introduced species have become established in Australia.
5       The dung beetles cause an immediate improvement to the quality of a cow pasture.

Question 9-13
Complete the table below.
Choose NO MORE THAN THREE WORDS OR A NUMBER from Reading Passage 6 for each answer.
Write your answers in boxes 9—13 on your answer sheet.

LISTEN TO THE IELTS READING PASSAGE -a new concept!
Stepwells A millennium ago, stepwells were fundamental to life in the driest parts of...
IELTS IELTS-Listening- Level 3 IELTS-READING

IELTS LISTENING-MAPS and FLOW CHARTS with KEY-PART 2
IELTS IELTS tests are held in over 120 countries around...
IELTS IELTS-Listening- Level 3