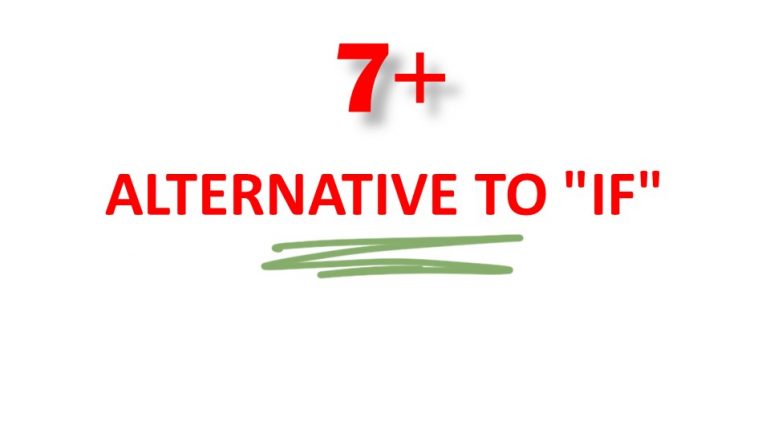 – UNLESS. He won’t be happy unless he marries her.
– PROVIDED. China will become the next super-power provided they keep on growing.
– AS/SO LONG AS. I will never buy another car as long as mine is fine.
– EVEN IF. I will go running even if it rains.
– IF ONLY. If only I had studied harder!!( I would have been able to pass the exam)
– SUPPOSING. (can replace if). Supposing you won the lottery, what would you buy?
– IMAGINE/ SUPPOSE. (can replace if). Sometimes the conditional clause is often understood but not stated. Imagine you won the lottery!
– OTHERWISE. (or if not). It can go at the beginning or end of the sentence
If I hadn’t studied, I wouldn’t have passed the exam= I studied. I wouldn’t have passed the exam otherwise.
– BUT FOR. (if not). Formal language. It must be followed by a noun.
If your dog hadn’t defended us, we would have been mugged= But for your dog, we would have been mugged.
– IF SO/ IF NOT. (refers to implied information). I think he may be drunk. If so, I must drive.
– IF + ADJECTIVE. (Sometimes it is possible to omit the verb to be)
If you are interested, call me.= If interested, call me.
– IN CASE. In case you are made redundant, what would you do?

– SHOULD. (UNLIKELY POSSIBILITY). If you should find my lost purse, could you call me?
– WERE TO. (stresses the hypothetical condition). If I were to kiss you, what would you do?
– HAPPEN TO (emphasizes chance possibilities. Often used with should).
If you (should) happen to see the headmaster, tell him I need to talk to him.
– IF IT WERE NOT FOR/ IF IT HADN’T BEEN FOR ( emphasizes one event depends on another) . If it hadn’t been for her friend, nobody would have lent her the money.
– WILL / WOULD. (politeness) . If you will/would follow me, I will show you the way out.
– WOULD. It is often used in sentences where a conditional sense is implied but not stated. Nobody would run for election (If they were asked to)

– INVERTED CONDITIONAL SENTENCES WITHOUT IF.( more formal and less likely)

with USEFUL INFORMATION FOR 6+
The IELTS listening test is the same for both...
IELTS IELTS Listening Full Practice exams
MAKE A COMMENT