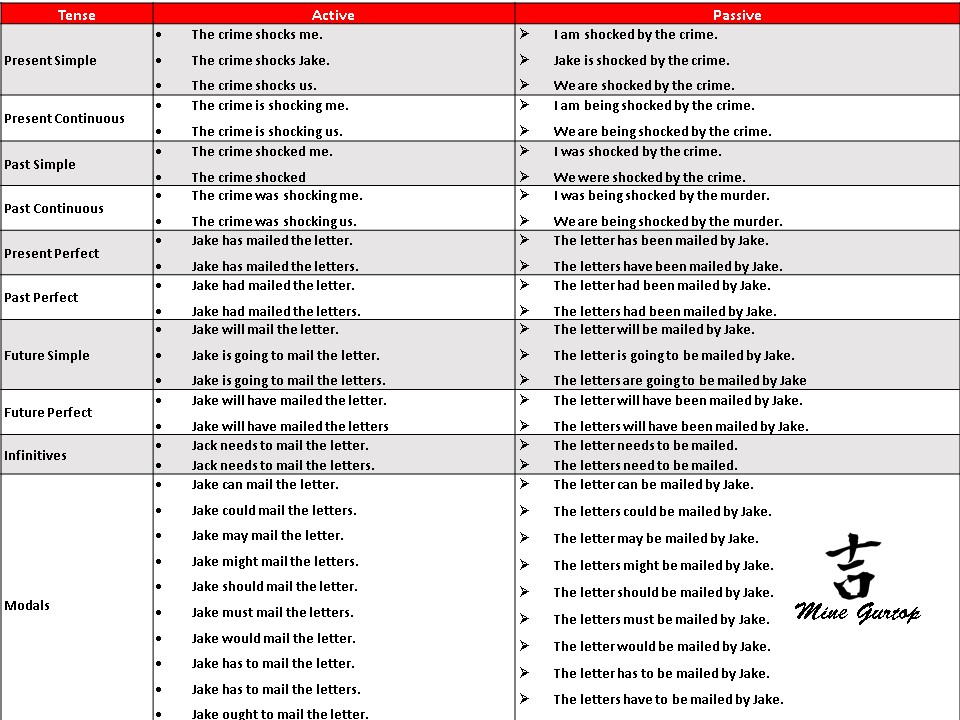 1- Change the underlined active verbs into the passive form:

2- Change the underlined active verbs into the passive form:

1. The lawyer will give you some advice.
2. Sue asked the policeman for directions.
3. The pirates had found the treasure.
4. Peter is going to take the package later.
5. Someone has already stopped the machine.
6. The coach always encourages the trainees.
7. Meg needs to wipe the floor right now.
8. The employees might suggest new rules.

3- Change the underlined active verbs into the passive form:

1. We didn’t notice the new changes.
2. The store won’t deliver the furniture.
3. They haven’t collected the taxes yet.
4. The students didn’t study the poem well.
5. We don’t accept credit cards here.
6. Tim wasn’t planting trees at seven.
7. You shouldn’t water this plant daily.
8. They are not interviewing the applicants.

1. The new changes weren’t noticed.
2. The furniture won’t be delivered.
3. The taxes haven’t been collected yet.
4. This poem wasn’t studied well by the students.
5. Credit cards are not accepted here.
6. Trees were not being planted at seven.
7. This plant shouldn’t be watered daily.
8. The applicants are not being interviewed.

4- Change the underlined active verbs into the passive form:

1. Did the driver hit the boy yesterday?
2. Will the police question all the suspects?
3. Have you signed the house contract?
4. Do people speak English in Spain?
5. Who broke the vase in the sitting room?
6. Are you roasting chestnuts now?
7. Can you reach the top of this mountain?
8. Was Jim playing the piano very loudly?

1. Was the boy hit by the driver yesterday?
2. Will all the suspects be questioned by the police?
3. Has the house contract been signed?
4. Is English spoken in Spain?
5. Who was the vase in the sitting room broken by?
6. Are chestnuts being roasted now?
7. Can the top of this mountain be reached?
8. Was the piano being played very loudly?

5- Change the underlined active verbs into the passive form:

1. The secretary gave Martin some letters.
2. My friend has sent me an invitation.
3. Mike is showing Laura some pictures.
4. Kevin will buy Jane a new car next week.
5. Joe always lends Tom some money.
6. The company will pay him a lot of money.
7. Will the college award Dan a scholarship?
8. The court denies the criminal some rights.

Use by when it is important to mention the agent or the person who performed the action.
The little boy was rescued by a stranger.
Use with for objects which perform actions.
Backgammon is played with dice.

1- People eat a lot of fast food these days.

2- The company will advertise the new product on TV next month.

3- The teacher shouted at Jill at school today.

5- They won’t have completed building the bridge by the end of the month.

6- Had Mira checked the mail before she went to school?

7- Hundreds of dissidents are seeking refuge in the US embassy.

9- Do you usually feed your chickens corn?

10-Wind and rain have eroded the statues into shapeless stones.

11-When did they show the news of the earthquake on TV?

12-Adam hadn’t expected Kate to come on time by the time he got home.

14-You need to polish the shoes regularly to protect the leather.

15-Sally was taking care of the children during the interview with the press.

ACTIVE ENGLISH: BOOK 4 / PAGE 167 Future Perfect Continuous ( TENSES MIXED)
will have been + V-ing 1. By next December my...
Grammar QuizLand