The Story of the Aral Sea-listen to the reading passage 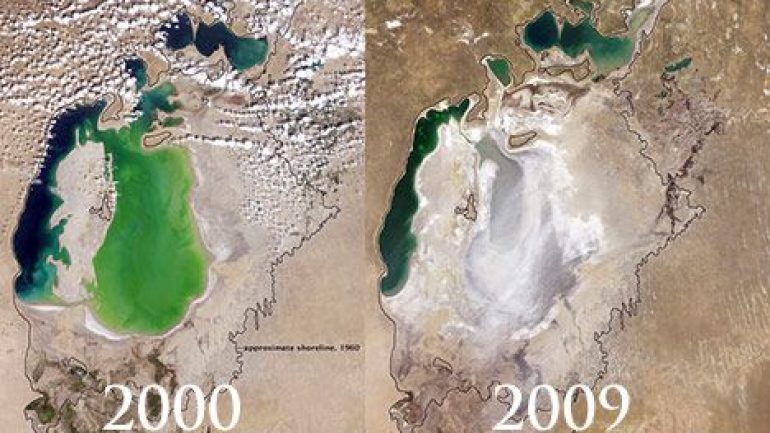 In 2009 in Kazakhstan, a group of fishermen met on a Sunday afternoon. They were on the beach of the North Aral Sea. They ate food. They did some sports. Afterwards, they told stories and sang songs about the Aral Sea and fishing. It was a good party.

The fishermen were happy because there were fish in the water. For many years, there weren’t many fish. At one time, the Aral Sea in Central Asia was the fourth largest lake in the world. It had an area of 67,300 square kilometres. Two of the biggest rivers in Central Asia, the Amu Darya and the Syr Darya, went into the Aral Sea. But the water almost disappeared.

The Aral Sea was a busy place. Almost 20 percent of the Soviet Union’s fish came from here. 40,000 people lived and worked near the lake. Then people used the water in the two rivers for agriculture, so the water didn’t arrive at the Aral Sea. Also, it didn’t rain for many years.

Then, in 2005, the Kazakh government and the World Bank built a dam. The dam separated the north and south parts of the sea. Then the north part of the Aral Sea started to fill with water again.

Philip Micklin is a scientist. He studies the Aral Sea. In 2010 he said ‘Nature can come back.’ But in 2014, he saw satellite pictures of the east part of the Aral Sea. It was completely dry.

In June 2015 a scientist from Uzbekistan, Yusup Kamalov, and a National Geographic reporter visited the Aral Sea. They found a huge desert. They stood on the sand. Once it was the edge of the water. Now the water is 80 kilometres away. They drove to the water. On the way, they passed oil and natural gas rigs. Kamalov said that every year there are more oil rigs. They arrived at the edge of the Aral Sea. The water was very salty. There were no fish. Kamalov said, ‘This is what the end of the world looks like’.

PANDORA-improve your listening – 5
Listen to the conversation. Then, answer the following questions.
Improve Your Listening Pandora

PANDORA-improve your reading -13
Elderly Animals Just as people age, so do our pets....
Improve Your Reading Pandora

PANDORA-improve your reading -5
The Netfl ix Prize Online contests, in addition to generating...
Improve Your Reading Pandora
MAKE A COMMENT