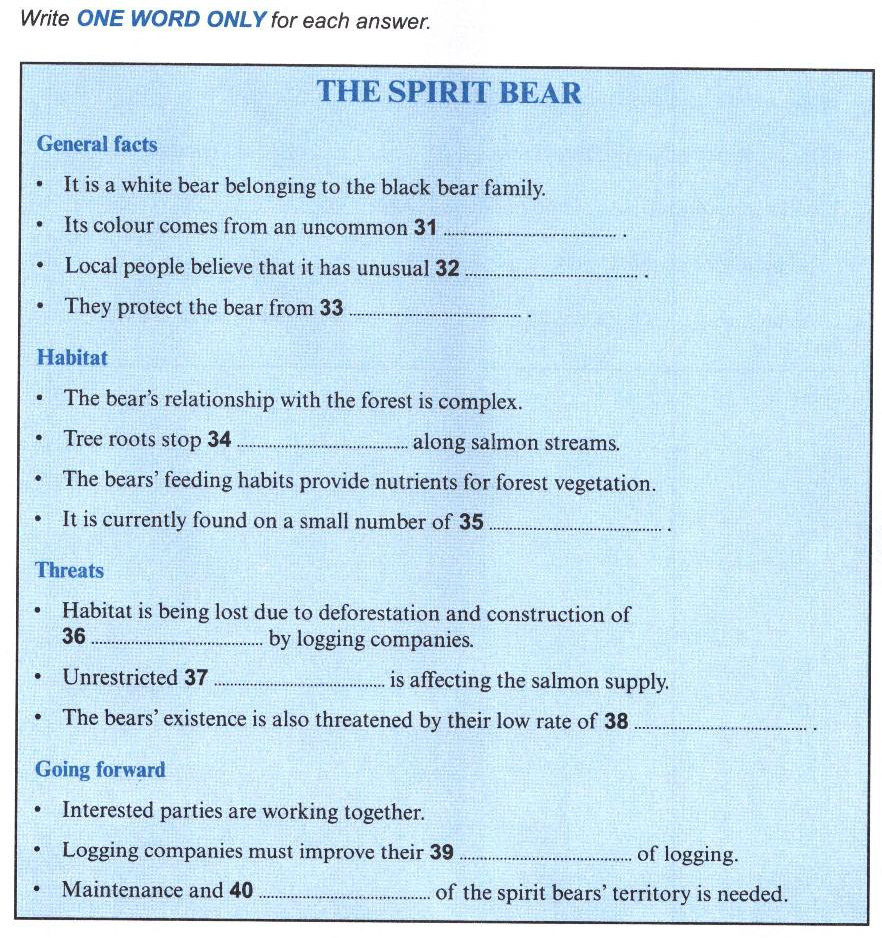 To day we continue our series on ecology and conservation with a look at a particularly endangered member of the black bear family. One in ten black bears is actually born with a white coat, which is the result of a special gene that surfaces in a few. Local people have named it “the spirit bear”. And according to the legends of these communities, its snowy fur brings with it a special power. Because of this, it has always been highly regarded by them- so much that they do not speak of seeing it to anyone else. It is their way of protecting it when strangers visit the area.

The white bear’s habitat is quite interesting. The bear’s strong relationship with the old-growth rainforest is a complex one. The white bear relies on the huge centuries- old trees in the forest in many ways. For example, the old-growth trees have extremely long roots that help prevent erosion of the soil along the banks of the many fish streams. Keeping these banks intact is important because these streams  are home to salmon, which are the bear’s main food source. In return, the bear’s feeding habits nurture the forest. As the bears eat the salmon, they discard the skin and bones in great amounts on the forest floor, which provide vital nutrients. These produce lush vegetation that sustains thousands of other types of life forms, from birds to insects are more.

Today, the spirit bear lives off the coast of the province of British Columbia on  a few islands. There is great concern for theit survival since it is estimated that less than two hundered of these white bears remain. The best way to protect them is to make every effort to preserve the delicate balance of their forest environment – in other words, their ecosystem.

The greatest threat to the bear’s existence is the loss of its habitat. Over many years, logging companies have stripped the land by cutting down a large number of trees. In addition, they have built roads which have fractured the areas where the bear usually feeds, and many hibernation sites have also been lost. The logging of the trees along the streams has damaged the places where the bears fish. To make matters worse, the number of salmon in those streams is declining because there is no legal limit on fishing at the moment.

All these influences have a negative impact on the  the spirit bear’s very existence, which is made all the more fragile by the fact that reproduction among these bears has always been disappointingly low.

And so, what’s the situation going forward? Community organizations, environmental groups and the British Columbia governmnet are now working together on the problem. The government is now requiring logging companies to adopt a better logging method, which is a positive step. However, these measures alone may not be sufficient to ensure a healthy population of the spirit bear in the future.

Other steps also need to be taken. While it is important to maintain the spirit bear’s habitat, there also needs to be more emphasis on its expansion. The move is justified as it will also create space for other bears that are losing their names…

IELTS SPEAKING 17-2 WITH TIME MANAGEMENT
PART 1 The examiner asks you about yourself, your home,...
IELTS IELTS SPEAKING