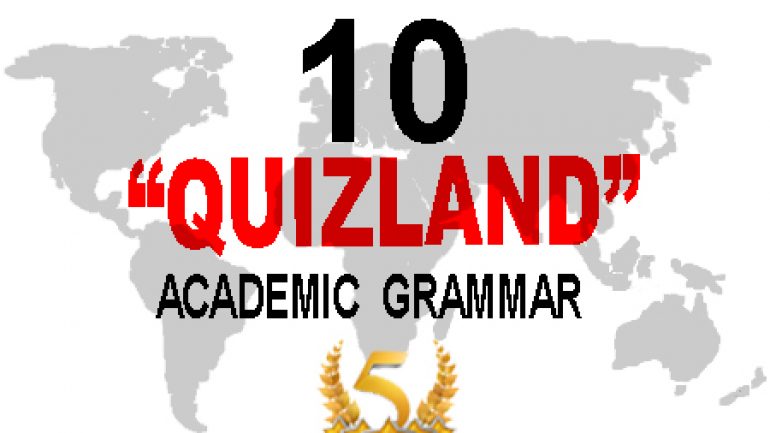 17- When watching television, you should sit ....... from the TV set for the scanning lines on the picture, which cause strain on the eyes, to be invisible.
Correct!
Wrong!

18- One problem with the death penalty is that once a man has been executed, it is ........ to question whether or not he is innocent, should new evidence be found.
Correct!
Wrong!

19- There is .......... interest in producing an endof- term play this year that we should
probably forget the idea.
Correct!
Wrong!

7- Stop making ....... insulting remarks to
everyone all the time. It's gaining you
nothing but dislike.
Correct!
Wrong!

14- After ........ consideration, we have decided to accept your claim for compensation.
Correct!
Wrong!

12- Instead of facing an opposing team, mountain
climbers test their skills against the ....... forces of nature, which can be rather dangerous in some cases.
Correct!
Wrong!

24-........ popular of all the tasks on the farm was cleaning the cowsheds because it was dirty backbreaking work.
Correct!
Wrong!

5- He thought he had found a genuine Monet painting in his loft, but actually, it is just a/an ....... copy.
Correct!
Wrong!

23- Long regarded as a/an ...... organ serving
no real purpose at all, the human
appendix is now thought to be an
important part of our immune system.
Correct!
Wrong!

25- Fortunately, we remember ........ we perceive; otherwise, our minds would be a storehouse of miscellaneous, unasserted data.
Correct!
Wrong!

ACADEMIC GRAMMAR-Adjective-Adverbs - 4 I got %%score%% of %%total%% right

There are three main positions in a clause for adverbs:
front position (before the subject):
Normally, I write for about six hours a day.
mid position (between the subject and verb, immediately after be as a main verb, or after the first or second auxiliary verb):
I usually start work by about 8.00. I’m generally up at about 7.00. I had never been to Norway before.
If my books hadn’t been successful, I would happily have stayed in teaching or! would have happily stayed..
end position (after the verb; either immediately after it or later in the clause): He writes simply.
Many adverbs can go in any of these positions, depending on the context or style of writing
Gradually, they grow into real people. or They gradually grow …. or They grow gradually….

Some adverbs tend to appear in particular positions:
Always, never; adverbs of indefinite frequency (hardly ever, often, rarely, regularly, seldom); and degree
adverbs (almost, hardly, nearly, quite, rather, scarcely) are usually put in mid position:
I rarely have a clear idea. I always know how a book is going to end.
Constantly, continually, regularly; absolutely, completely, entirely, greatly, perfectly are usually put either in
mid or end position, but not in front position:
I greatly admire William Boyd. or! admire William Boyd greatly. (not Greatlyq-affmife …)
Adverbs of place are usually put in end position: I work upstairs.
Adverbs of definite time and frequency are usually put in end position:
I finished my previous book last January.
Adverbs of time or frequency consisting of more than one word (e.g. as a rule, from time to time, every so often) are usually put either in front or end position, but not mid position:
As a rule, I prefer finding information from books.
We avoid putting an adverb between a main verb and a direct object, or following an -ing form or to-infinitive
I still speak Swedish quite well
I started writing professionally.
Id like to go back again.
In end position we usually put adverbs of place before adverbs of time:
I hadn’t been to Norway before. (not I hadn’t been before to Norway.)

The usual position for rather is between a/an and an adjective. Less often, but with a similar meaning, rather is used before a/an and an adjective
My mother was a rather gentle woman. or My mother was rather a gentle woman.
Already, yet, still
Already can go in either mid or end position:
I’d already decided that I wanted to write … or I’d decided already …
Yet is usually put in end position in negatives, questions and expressions of uncertainty:
I don’t know if I can tell you yet.
Still usually goes in mid position:
I’m still sketching out the plot
Even, only
Even and only usually go in mid position:
He can even speak Swedish.
but if they refer to the subject they usually come before it:
Sometimes even I’m surprised. Only my close family had read anything I’d written.
Really
The meaning of really can change according to its position in a sentence. Immediately before an adjective it
means ‘very’. In other positions it can mean ‘actually’ or ‘in fact’:
I’d been feeling really tired.
My friends thought I was joking but I really had decided to leave teaching.

MODALS -HARD-1
INTERMEDIATE /UPPER-INTERMEDIATE 1. His illness got worse and worse. In...
Modals QuizLand