10 English Phrases For Talking About The Future 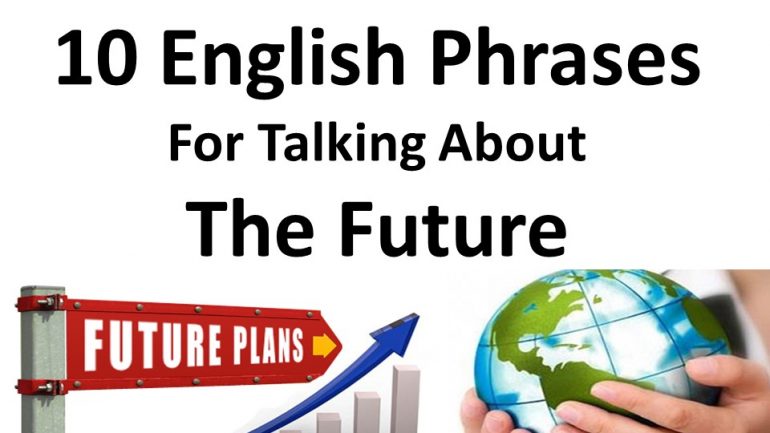 1 – IT WILL/COULD HAPPEN ANY MINUTE/DAY NOW.

Use this phrase to say that an event is definitely going to happen VERY soon, but it is not known exactly when. For example – “The doctors say she could have the baby any day now.”

2 – IT’S JUST/RIGHT AROUND THE CORNER.

3 – WE’RE PLANNING TO MOVE IN THE NEAR FUTURE.

4 – IT WILL/WON’T HAPPEN IN OUR LIFETIME.

“In our lifetime” means in the next 50-60 years. For example, you could say, “Medicine is progressing very fast; I think a cure for cancer will be developed in our lifetime.”

Use this phrase when something happens that indicates how things will be in the future. For example, if the economy is starting to get worse and worse, you could say, “Three people I know have lost their jobs recently – this is a sign of things to come” – meaning that you believe many more people will lose their jobs in the future.

Use this phrase when you are anxiously awaiting a future event; you want it to happen soon. For example, “I’m counting down the days until my trip to the Caribbean!”

Use these phrase to say that something will DEFINITELY happen sometime in the future (it may be soon, or it may be far in the future.)

Use this phrase to say that you will do something in the future, when you have the time. It is usually used for activities that are not especially urgent.

Use these phrases to say that you will do something in the future, as soon as possible. These expressions are used for urgent tasks.

Use this phrase to say that a situation is currently uncertain, but in the future it will become clear. For example, if you are discussing whether or not the country’s new president is good, you could say “Time will tell” to express that the answer will be revealed over the coming months/years.

IELTS READING Making time for science
Chronobiology might sound a little futuristic – like something from...
IELTS IELTS-READING

HOW TO IMPROVE YOUR IELTS SCORE ” IF CLAUSES AND WISH CLAUSES” EXAMPLES AND PRACTICE
EXAMPLES In my opinion, people are working in tourism industry...
IELTS IELTS SPEAKING IELTS-WRITING

IELTS ESSAY TEMPLATE-agree – disagree
INTRODUCTION To agree or disagree with the statement that (summary...
IELTS IELTS-WRITING
MAKE A COMMENT